A history of Hull's Family Bookstore

Hull's Family  Bookstore recently announced that it is closing up shop in Winnipeg. Another long-time independent store disappears from the local retail landscape. I thought I would take a look back and see what the Hull's was all about.

Its roots go back to Hull Printing Company started in 1919 by brothers John H. and Hugh Hull. The Hull family came from Belfast, Northern Ireland in 1911 when most of the seven Hull siblings, James, John, Robert, Hugh, Mabel, Ethel and Alice were teenagers.

At the start of WW I siblings Hugh, John James and Mabel lived together at 277 Langevin in St. Boniface. Hugh was a clerk at Eaton's, John a printer at Martin-Senour. By 1918 the four were at 675 Agnes Street, Hugh and John both working for Eaton's as clerks.

When John and Hugh were called for military service in 1917, they applied for exemptions on the grounds that they were conscientious objectors, (see their respective attestation papers here and here). A hearing took place in mid-December to hear the cases of around 25 people seeking exemptions. Most wanted ninety day temporary stays (until March 1) for "domestic matters" or "business reasons" and got them while the five conscientious objectors did not.

I couldn't find a record of whether the brothers actually served in the military and, if so, what they were assigned to do.

When the war was over John and Hugh pooled their resources, about $300, and established Hull Printing Company. They did regular commercial printing but their Hull Publishing specialized in Christian books and magazines. Hugh published a magazine called Gospel Daily News from there for nearly fifty years.

Over the years Hull Printing Co. operated out of a number of locations starting with unit 404 of 286 Bannatyne Avenue, the facade of which still stands at Bannatyne and King.

By the 1930s they were located at 105 Princess Street. The Sanford Building, as it was known, burned down on February 13, 1941. Hull Printing had just secured a large catalogue contract but, thanks to other print shops around town who allowed them access to their facilities, they continued in business.

Their next location was known as the Hull Block at 314 Notre Dame Avenue, (now demolished). It was a multi-storey building with twenty-five suites above and Kilgerman's book bindery in the basement. Hulls shop and show room were on the main floor. In February 1949 the building was rocked by an explosion that originated in the basement. Three bindery workers were injured.

In the mid-1950s the business partnership dissolved. John, a printer, changed ran the printing business, dropping commercial work in favour of just Christian material. Hugh took over the book selling side which now had a healthy mail-order customer base.

In the late 1950s and early 1960s Hull Printing Company's business address was 576 Home Street, the home address of John and his wife Mabel. John would have been in his mid sixties at the time. 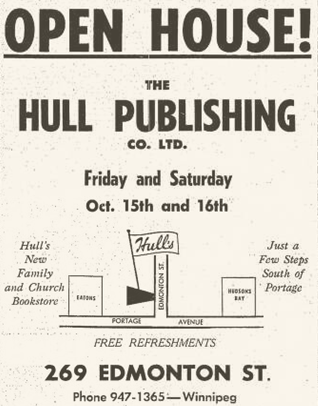 In 1963 son Wes Hull purchased the business from his father and in in October 1965 "Hull's" opened in a new storefront location in the heart of downtown, 269 Edmonton Street at Graham Avenue. At the new location they were able to expand their range of books, carrying 15,000 titles fir sale, and branched into a wider range of inspirational products such as church supplies and a film library.

In 1984 Hull's received an expropriation notice as part of the North Portage redevelopment project, (the site is now home to the Royal Winnipeg Ballet.) In 1985 they opened next door to the old site in a newly-built, 10,000 square foot building at 372 Graham Avenue. Branch stores were also opened in Steinbach and Thunder Bay. 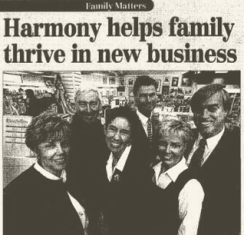 On January 29, 2014 the Smiths announced that the Winnipeg and Thunder Bay stores would close in February 2014 leaving just the Steinbach location.

Architect for the current building was Steve Cohlmeyer, Cohlmeyer Architects

Now maybe a business that customers can use will go in their place!

Why weren't customers able to use the bookstore ?

Thanks for that additionI hadn't realized they returned to Winnipeg !