Behind the Photo: "Perfection Concrete" ca. 1910 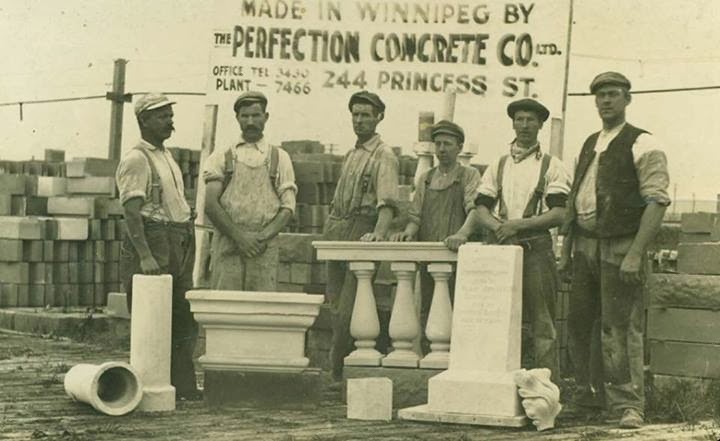 "Made in Winnipeg by the Perfection Concrete Company"
is an undated photo from the Winnipeg Architecture Foundation's collection. It would have been taken between 1908 and 1913 likely at the Winnipeg Industrial Exhibition.

In May 1907 a new concrete manufacturing company called the Perfection Concrete Company was formed in Winnipeg. Its incorporation papers stated that it was organized for the purposes of “...making hollow building blocks, artificial stone trimmings, lintel sills and fence posts.”

The president  was William Robinson, (likely “Captain” William Robinson, a lumber magnate of the day.) The Secretary-Treasurer was Gordon McKenzie and the company set up its front office in his wholesale hardware company co-owned by McKenzie at 244 Princess Street, (which appears not to be the Bathgate Block which is number 244 today).

A site was purchased on Notre Dame Avenue near St. James Street on which to build their first cement plant. The business started out small, just eight workers or so, but as the city continued to grow, so did demand for their products.

In March 1911 the company constructed a new $8,000 plant on a 4.5 acres site on the north side of Dublin Avenue near Empress, (adjacent to the Dominion Bridge Works.) The main building measured 82 metres by 137 metres and was 8 metres tall, constructed in cement block of course. The CPR ran a spur line to the site.

With the expanded premises came new product lines such as wall tiles and glazed sewer pipes. That required a lot more men.

According to the Henderson Directory, approximately 40 men worked at the plant at any one time between 1911 - 1913. The vast majority were labourers with some moulders and teamsters. Over a dozen of these men also lived on the site, likely in some sort of barracks set up by the company

A severe recession in 1913, followed by World War I took its toll on many Manitoba companies including, it seems, Perfection Concrete. In the 1914 and 1915 Henderson Directories they are back to a handful of employees. After 1915 there are no more listings or newspaper mentions of the company.

Related:
A larger version of this photo can be found here