Just before 4 a.m. on the morning of Monday, November 13, 1944 a fire began in the boiler room of St. Matthews Church. Within an hour the entire building was in flames.

There was nobody inside at the time, though four residents from a neighbouring rooming house had to be rescued by firefighters when part of the north wall collapsed onto it.

At dawn's light it was clear that the church was destroyed. All that was left standing were the stubs of three walls. Volunteers could only salvage a few pews and fixtures.

Later that morning, now Archdeacon, Calvert went on CKRC to proclaim that the church would be rebuilt - in time. In the short term, St. Matthews' religious services moved to All Saints Church, the Sunday school to the Strathcona Curling Club and other community programs were scattered around the West End and Wolseley.

The first step in the church's recovery was to clean out the expansive basement, which was still structurally sound.

In early December 1944 work began on placing a temporary roof over the site so that the congregation could move back into the basement in time for Christmas services. "The crypt" became their home for almost three years.


The focus then turned to money.

L. K. Johnson chaired a fundraising committee that had a huge task ahead of it. The replacement of the church was estimated at $70,000 more than the insured value of the old one - that's about $950,000 in 2013 dollars. Taking into account the new furniture and fittings, the committee decided that they had to have $110,000 in the bank before construction could begin.

Within a couple of weeks of the fire the congregation had pledged $22,000 towards the new building. Another $10,500 in donations came from outside sources, including other churches and former congregation members from across the city and country. As time went on, a number of fundraising concerts and other events were held in support of the building fund.

In November 1946, two years after the fire, St. Matthews marked a bittersweet Golden Jubilee. They were still worshiping in the church basement, though a new building was in site as they had raised $92,450 towards their goal. 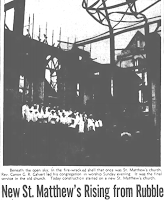 On the evening of June 3, 1945 Archdeacon Calvert led a special "service of sentiment" above ground, in the burned out shell. It was a chance for people to say farewell to the old. The following day demolition crews moved in and construction on the new church began.

The new church was based on the original 1913 design. The architect was J. N. Semmens, the general contractor was Claydon Company and the steelwork was by Dominion Bridge. While construction was underway, the congregation still worshiped each Sunday in the basement. 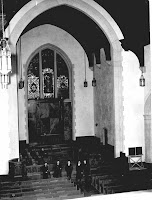 On February 2, 1947 the fifth St. Matthews Church since 1896 opened with a dedication ceremony.

The church again became home to community services such as boy scouts and Sunday school. The Grenadiers and 44th Battalion re-deposited their colours there and many related memorial and social services were held.

Some community programs did not come back as strongly, such as seniors events and youth recreation. By the time St. Matthews reopened, the city had begun organizing a city-wide program of community clubs. Orioles, just a few blocks west on St. Matthews, was one of the first, established in 1946.

St. Matthews then said goodbye to the man who guided them through these trying years. In December 1948, after 15 years at the helm, Archdeacon Calvert, his wife and daughter Betty left for Victoria B.C.'s Christ Church Cathedral. (Calvert eventually became an Anglican Bishop.)

He was succeeded on March 1, 1949 by Reverend John Burton Thomas. He was a former Winnipegger and St. John's graduate who had worked for a number of years in Calgary and New Westminster B.C.. He and his family resided in the 99 Middlegate rectory.

Thomas picked up many of Calvert's extra-curricular duties. He became a regular on CKRC's religious programming as well as the padre for the 78th Battalion. In March 1955, Thomas moved up the Anglican Church's hierarchy to become Dean of Rupersland.

Rev. John Doidge then served for 7 years until February 1961 when he left for St. Matthias Church in Montreal.  His replacement was Kenneth R. Cowan of Ottawa.


In the decade after the new church opened, more changed than just the pastors.

After years of the Depression and war, Winnipeg had not kept up with the demand for new housing and much of what was on the market had fallen into disrepair. When troops arrived home, they and their growing families wanted to move out of the small apartments or from living with parents or roommates. Dozens of new suburbs began to spring up on the outskirts of the old city and its adjoining municipalities.

The people who filled the West End's neighbourhoods were, at first, new immigrants from European countries such as Portugal which had no Anglican tradition. Later waves included First Nations and newcomers from from Asia.

This left the church with a tough decision: continue to provide services for a dwindling number of area Anglicans or take on a new role and serve the geographic community. They chose the latter.