No sooner had the foundation been dug, the city released plans that called for the widening of Lavinia Avenue that would see it run through to Sherbrook Street.

In what a Tribune reporter called  "one of the largest delegations that has appeared before city council in some time" church members attended to oppose the move. They argued that the city's offer to compensate them for the land did not cover the costs of the architect's work and custom steel that had already been ordered.

Work was temporarily halted for a week or so until the city decided not to proceed with the plan. 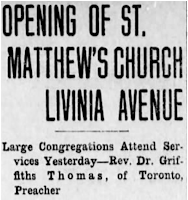 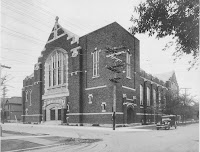 The cornerstone for the $100,000 building was laid on May 7, 1913 by Archbishop Matheson "with full Masonic ceremonies".  By late August the congregation moved into the basement and used it for their services and Sunday school while work on the chapel continued.

On November 9, 1913 the new building was ready and a series of dedication services were held.

Designed by Architect H. E. Matthews with R. G. Hanford (associate) and built by contractors Pattinson and Eilbech, the new St. Matthews Church was a modified Gothic design of brick with stone trim, just like its predecessor. This one, however, was be steel framed.

The chapel could seat 1400 worshipers and a choir of 100. The full basement and attached three-storey office building to the north was reserved for the Sunday school program and could  hold 1,000. The basement was also fitted with a kitchen, club rooms and showers to accommodate youth sports programming and other community activities. 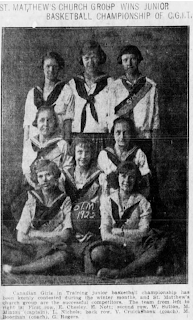 The church quickly became a hub of the West End community.

Aside from the usual church functions, St. Matthews also fielded sports teams, had one of the largest boy scout troops in the city and their Women's Auxiliary was the largest of any Anglican church in Canada. They had a large choir as well as an orchestra and their annual family picnic at Winnipeg Beach drew around 2,000 people.

It was Rev. McElhern who pushed for as many activities as possible to be run from the church. In an August 1, 1913 interview with the Winnipeg Tribune, he said:


“The church must serve its generation all week and not one day a week. My own idea is that the church should be used all the time. If the church does not do something for the young man between Sundays he will be lost to the church and the church to him.” 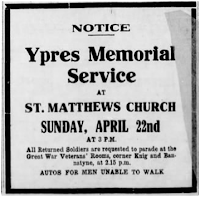 When World War I broke out, the church's Sunday school facilities were volunteered for the war effort. In December 1915 the Winnipeg Infantry Regiment Reserve Militia moved in and used it as their training facility and drill hall. The site became a hub for a range of military activities including social functions and memorial services.

The colours of three regiments: the 27th Battalion; the 44th Battalion; and the 78th Battalion (Winnipeg Grenadiers) were deposited there. Reverend Calvert of St. Matthews was also the Grenadiers' padre for a number of years.

When the war was over, St. Matthews hosted a number of "welcome home" events. Returned soldiers, sometimes 1,000 at a time, marched through the streets of downtown to celebrate their homecoming. Some of those marches ended at St. Matthews church with a memorial service and tea.

For decades to follow many military funerals, legion events and memorial services were held at the church.

In 1930 now Archdeacon McElheran announced that he was leaving after 24 years of service to become the principal of Wycliffe College in Toronto. The search for his successor found Rev. G. S. Despard, a curate at St. Paul's in Toronto. He stayed for three years then returned to that city to head another church.

Next in line was Rev. George M. Calvert. He was a popular figure in the city and his sermons were often broadcast as part of CKRC's Sunday morning programming. Calvert oversaw the continued growth and care of the congregation for the next 15 years, including during the darkest period in St. Matthews Church's history....

What an interesting article! My great-grandparents were married in St. Matthew's in 1927.