Wednesday, November 20th is centenary of the death of George McPhillips. You know his last name thanks to the street, but you probably know nothing about the man.

McPhillips was born and raised in Richmond Hill, Ontario in 1848, one of five brothers and three sisters. At age 17 he obtained his Ontario teacher's certificate and after a few years of teaching was accepted to medical school.

His father, George Sr., an Irish immigrant who first settled in Toronto, was a Dominion Land Surveyor and it was not uncommon for his sons to help out with his work. Around 1871 two sons, Francis and Robert, accompanied George Sr. to Red River. Whether it was because he missed his family or hearing stories of life out West, we don't know, but George dropped out of med school to join them in 1872. (Eventually the entire McPhillips family went to Winnipeg).

McPhillips assisted on this map as Deputy Surveyor, 1874 (source)

McPhillips worked towards obtaining his certification as a Dominion Land Surveyor (DLS), writing his final exam in 1875. The year prior, likely as an apprenticeship, he was employed as a Deputy Surveyor by the Province of Manitoba.

One of the documents that his name is associated with during that period is the above Province of Manitoba map, Plan of River Lots in the Parishes of St. John, St. James and St. Boniface from 1874.  (For a list of more of McPhillips' surveys up to 1889 see here.) 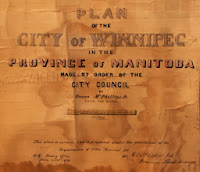 
In 1875 George McPhillips got a plum assignment when the City of Winnipeg contracted him to create the first official maps of the city. It took him a year to complete.

From then on, he was busy surveying new towns and railway routes in Manitoba and the North West Territories. In 1883 was commissioned to create the official maps for the city Windsor, Ontario and outlying townships, (which he updated in 1894). 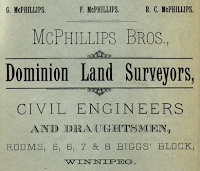 By 1880 George was ready to settle down. That year he married  Flora Ella Caron of Windsor, Ontario and they had three children, William, (who eventually carried on the family trade), George and Mary.

In 1881 George and his brothers Francis and Robert, created the firm McPhillips Brothers located in the Biggs Block at 469 Main Street. (By this time, George Sr. had retired and died in 1884). The firm was kept busy preparing the West for the oncoming railway and population boom.

In 1882 George applied to become the surveyor of the City of Winnipeg. The city agreed but the motion to accept his appointment resulted in a tie vote at the finance committee with the mayor casting the deciding vote against his hiring. The newspapers did not give a reason.

George must have been a very private man. Though his name and work was well known around town and, according to biographies of the day, he had a number of impressive achievements under his belt, his name rarely appears in the Tribune or Free Press. I can't find any articles that quote him or provide additional biographical information. Even the Free Press story of his death was extremely light on detail and the Tribune printed just a photo.

Goerge is mentioned in passing in the Free Press when Sir Charles Tupper,  then Minister of Railways, visited Winnipeg in 1880. McPhillips shared the carriage ride around town with him and Alderman George Fonseca. (McPhillips was the president of the Conservative Association for over a decade.)

In 1883 he was one of a number of people who responded to the toast at a St. Patrick's Day dinner, (he was a former president of the St. Patrick's Society), saying that in terms of importance, the holiday was only behind Christmas and Easter. The Free Press reports that "He referred with pleasure to the amity and good feeling between the various nationalities that were fast settling this new country…."

One biography mentions that in 1886 he was involved in the construction of Windsor, Ontario's streetcar system, the first in Canada.

The McPhillips family spent most of their life living on Kennedy Street.

In the 1880s they lived at 98 Kennedy while brother Robert, his family and their widowed mother lived at 96. In the early 1900s they briefly appear on Edmonton Street but by 1905 were at 168 Kennedy where George and Flora remained for the rest of their lives.

In 1906 McPhillips took the position of chief surveyor of Western lines for the CPR. In 1912 he fell ill, newspapers did not reveal the illness, and died at his home on November 20, 1913 at the age of 68.

As for the rest of his family, brother Francis also died in 1913. Robert continued working as a surveyor for another couple of years. Both Robert and George's wife Flora died in 1939.

According to Shave, McPhillips Street was named for George McPhillips in 1876. In a November 1992 column, however, Vince Leah attributes it to brother Francis. If the name was put forward by the city, (I did not look back in city bylaws to confirm this), it must have been as a thank-you to George for creating the city's first map because at that time he would only have been a surveyor for one year.

Another possibility is that George may have named it himself while he was drawing up the survey, (according to Shave, "McPhillips Street" was originally a line indicating where the Selkirk Settlers' lots ended and vacant prairie began.)  If he did add it to his map to provide a name for the line, he could have named it for himself, his father or the whole McPhillips clan.

George McPhillips' first city map in 1876 was invaluable to city planners, developers, surveyors and railways as they developed the city and surrounding areas. It was his public version of the map, however, that made him a household name.

McPhillips patented the McPhillips Map, which became known by the plural McPhillips' Map when McPhillips Bros. was formed. On a couple of occasions he took out ads in the classified section reminding printers that the work was his, don't reprint it in whole or in part.

There were a number of updates to the map over the years, including 1881, 1910 and 1913. After George began working for the CPR, it was brother Robert who updated it and marketed it until around 1914 when ads for it disappear.

An original 1876 McPhillips map is on display in the former Carnegie Library / City Archives building on William Avenue. A number of McPhillips' maps can be found by searching the last name at Manitoba Historical Maps on Flickr and at Library and Archives Canada.

Thank you for this, I found it particularly interesting because I once met George McPhillips great-grandson. I was taking down his name and when I asked him if it was spelled like the street he said yes…because the street was named after his great-grandfather. I worked at the City at the time and every historical map I saw after that I noticed the McPhillips stamp on it. Now I know a little more about the man.