On October 16, 1951 then-Princess Elizabeth and the Duke of Edinburgh stopped in Winnipeg as part of a month-long tour of Canada. During their brief time here, they did many of the things expected of a Royal visit: inspecting troops; visiting the Legislature and attending a gala performance at the Auditorium showing off the best of Manitoba talent.

Something not on the itinerary was a public appearance. Even catching a glimpse was difficult as unseasonably cold weather meant that the top had to be put on the Royal convertible. The only exception, it appears, was when a group of people broke through barricades near Portage and Main causing the motorcade to slow down long enough for some to catch a Royal wave.

Though the official itinerary did not include a visit with injured and aged Veterans at either Deer Lodge Veterans' Hospital or the Veterans' Home on Academy Road, it was assumed that this Royal prerequisite wold be worked in during the day. As their visit wound down, it was apparent that no such stop was going to take place and frustration turned to anger.

Local Veterans reminisced about the visit of King George VI and Queen Elizabeth I in 1939. When the couple was informed that their schedule would no longer permit them time to get to Deer Lodge, the King insisted on meeting Veterans. Patients from both facilities were hurriedly bussed to the CN Station for a meet and greet and to see the Royal couple off.

The day after Princess Elizabeth and Prince Philip left, the Royal Canadian Legion issued a statement of protest stating that it was "stupidity and callous neglect” on the part of organizers that those who had so recently been wounded for King and country were not part of the day.

The oversight was blamed on the Ottawa officials who organized the tour. They limited the number of Veterans' hospital visits for the Canadian tour to three and Deer Lodge did not make the cut. It wasn't their only oversight as the visit was oblivious to issues such as the 1950 Red River flood which made headlines around the world, prompted relief flights of food and clothing from Britain, and still had many parts of the city in ruin.

Dozens of angry letters to the editor were published after the visit. The tone was best summed up by "Irate Citizen" from Wildwood Park which appeared in the Winnipeg Free Press of October 22nd:


No time for Veterans but time for every politician in Manitoba. No time for children unless they happened to have a politician as a parent. No time for the Princess to visit a flooded home as she wished because 135 politicians and their wives had to be introduced to the Royal couple.

It was said that when the Royal couple learned of the oversight, visits to Veterans' hospitals were added to the itinerary of the remaining cities of Vancouver, Edmonton and Saskatoon. The question became what to do about Winnipeg ?

Saskatoon marked their final stop in the West. After that, they boarded a plane for Fort William, (now Thunder Bay), and from there it was down to the United States. The Saskatoon to Fort William flight over of Manitoba was the only possibility. Organizers chose the Joint Air Training Centre at Rivers, Manitoba as the location.

At 8:30 a.m. on October 28, 1951, three buses filled with Veterans from Deer Lodge and the Veterans' Home left Winnipeg. (There was still some bitterness as men that were too injured to be away from hospital all day could not go.) Upon their arrival at Rivers, the Vets were provided with a full-course meal before being brought to the reception area to wait for the Royals to arrive.

They weren't the only ones to make the journey that day. RCMP, who handled traffic with the help of military planes, estimated that 12,000 cars or 60,000 people descended on the town to take in the occasion.

The Royal plane landed at 3:03 p.m.. The couple were officially received by military brass and a load of VIPs that included Lieutenant Governor R. F. McWilliams, Premier Douglas Campbell and  Mayor Sinclair of Rivers. (As if expecting to be somewhere less desolate, Elizabeth asked the mayor where the actual town site was located.)

After an inspection of the troops and a 21 gun salute, it was a drive down the runway to the reception area. Over 1,000 servicemen and cadets from Shilo and Brandon acted as a human barrier to hold back the tens of thousands who crowded in to get a glimpse. 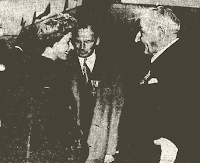 One Veteran the couple talked to was 81 year-old Ed Smith. He was a Veteran of South Africa and a one-time member of the Royal household guard who had seen Elizabeth when she was a baby. Another was Sgt. Bill Raithby who was stretcher-bound after recently breaking his back during a parachute training jump.

The stopover was to have lasted an hour but it was more than two hours later before the couple finally climbed aboard their plane.

Less than four months later Elizabeth became Queen when her father died. In 1954 Philip returned to Rivers on a solo visit.