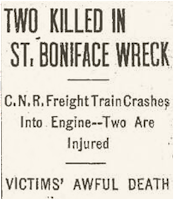 Just after 4:00 pm on January 24, 1916, a 20-car freight train was departing St. Boniface on the CNR's main line. At the same time a switching engine was heading in the opposite direction. In their respective clouds of coal smoke neither crew saw each other when rounding a curve near the foot of rue St. Jean-Baptiste.

The force of the collision pushed the coal tender of the freight train into the cab of the switching engine, crushing it. 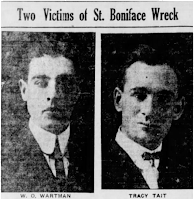 Gilmore and Tait, both sitting in the cab, were pinned between the coal tender and their engine's boiler. Boiling water from broken pipes rained down upon them for about ten minutes until they finally died. Wortman died seven hours later at St. Boniface Hospital from internal injuries and frostbite. Creiger and Morrison survived with minor injuries.

Nobody from the freight train's crew was injured. The man in charge of it, sadly, was George Tait, brother of Tracey from the switching engine. He was riding in the caboose at the time of the crash.

The following evening a coroner's inquest was held. The jury required just one hour to return a verdict of accidental death. They blamed the crews of both trains for failing to properly look out for each other on the track.

The tragedy came just two weeks after the Brandon train disaster when 16 were killed when a work train and freight train collided.