It would have been impossible to pick up the sports section of a Winnipeg newspaper in the 1930s and 40s without reading about Jeff Nicklin. He was a key player on championship lacrosse, hockey, basketball and rugby-football teams. As a paratrooper in World War II, his daring raids and and untimely death received national attention.

Not long after the war, Jeff Nicklin's name and achievements all but vanished from local sports lore. Here's my part helping to tell his story.

Jeff Albert Nicklin was born on December 10, 1914 in Fort William, Ontario and moved to Winnipeg with his family a decade later. Percy Nicklin, his father, was a hockey player who in the 1930s coached the Moncton Hawks to back-to-back Allen Cup victories and brought the British men's ice hockey team to the Olympics.

Jeff attended Mulvey, Gordon Bell and Kelvin schools and in 1930 began his sports career. Despite the many sports that he excelled in, Nicklin chose to pursue football. 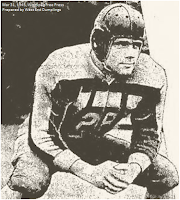 In 1932, Micklin became a member of  the Winnipeg Junior Rugby Football League's Junior Winnipegs team. The following season, he joined the Deer Lodge Juniors and went on to win the 1933 Manitoba - Saskatchewan league and the 1934 Western Canadian rugby-football championship.


Later that year, while still of junior league age, Nicklin jumped to the senior Winnipegs team, (which eventually morphed into the Winnipeg Blue Bombers). At the time they were the reigning Dominion rugby-football champions.

This led to friction between the two teams as Deer Lodge accused the Winnipegs of poaching, while the senior team said that Nicklin was simply too good to be playing at the junior level.

Also during this time, Nicklin spent the winter and spring playing indoor lacrosse. He was instrumental in leading the Winnipegs' senior team to an undefeated regular season in 1933.


Nicklin's first big league rugby-football match came on September 15, 1934 against the University of Minnesota All-Stars, (the first half was played under Canadian rules, the second under American). Neither team excelled at the hybrid game and the Winnipegs lost 13 - 8.

The near capacity crowd at Osborne Stadium did get to see a preview of Nicklin's football prowess which included him scooping up a fumble in the dying minutes to set up the home team's only touchdown.

Free Press sports writer Cam  McKenzie wrote: "Young Jeff Nicklin, playing his first game in senior football, turned in a sound exhibition at right end. Jeff has a great pair of hands and can tackle with the best of them and should be a valuable man to the Winnipegs in their bid for another championship." (September 17, 1934, Winnipeg Free Press.)

Indeed, Nicklin proved a valuable man to the Winnipegs for the next seven seasons.

A Winnipeg Tribune writer referred to him as “One of the finest native-bred performers prairie football ever has produced.” (Winnipeg Tribune, August 13, 1940)

When he wasn't playing pro football, Nicklin was coaching football at Isaac Brock School and had a day job with the provincial department of mines and natural resources. He was also dating a young woman named Eileen Hollingsworth.

The 1940 football season didn't play out as many had expected. Through the course of the year a number of players, including at least 6 starters, enlisted to fight in the war. Despite this, the Blue Bombers, (as they were now becoming known), won the Western Championship, but there was no east - west final match-up that year.

Nicklin enlisted with the Royal Winnipeg Rifles in the summer of 1940 and went to Shilo for training. There, his commanding officers saw in him what his coaches did on the football field: an intense, quick study who possessed great leadership skills. He was soon enrolled in officer training.

The 25-year-old, seven-season Bomber veteran was able to squeeze in some football games in August and September before being shipped to Shilo for training. 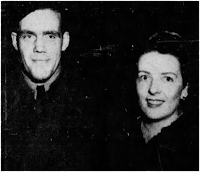 
On September 14, 1940, Nicklin wed his girlfriend Eileen at St. Alban's Church. The couple had a brief honeymoon in Kenora before moving into the Rothesay Apartments on Preston Avenue. For Nicklin,the stay was brief as he soon returned to Shilo. In 1941, he was deployed overseas.

When word got out in May 1942 that Canada was going to create the 1st Parachute Battalion Nicklin immediately volunteered. After some training in Britain it was off to Fort Benning, Georgia, then back to Shilo in September 1942 where he trained new paratroop recruits.

Once back in Manitoba, Nicklin had time to watch a few football games in-person.

The senior league had been suspended due to the war, but the RCAF Bombers, which included some of his old teammates, played in a newly-formed city league. Nicklin did the ceremonial opening kick-off at their September 25, 1942 game against U of M Varsity. The Bombers won the game 20 - 1 for their first victory of the season. 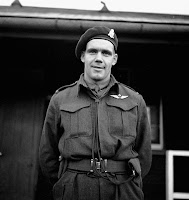 Nicklin was back overseas in 1943. This time he was a major and second-in-command of the parachute battalion responsible for training.

In June 1944, Nicklin narrowly escaped death on his first operational jump into enemy territory when he went off course and landed in the midst of a German-held town. His parachute snagged on a roof and he was left hanging in plain view. While under fire Nicklin cut himself down and eventually stole out of town to rejoin his men.

One month later, he was severely wounded when he tripped a wire on a mine full of shrapnel that his own men were going to lay. He spent months recovering in a British hospital. 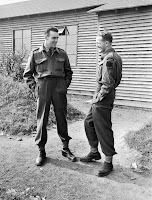 The military brass were unhappy with the progress and discipline of the parachute battalion and laid much of the blame at the feet of its commanding officer Lieutenant Colonel G. F. P. Bradbrooke. Many felt he was in over his head.

Nicklin had a reputation as a taskmaster and harsh disciplinarian and they felt that he was just the person to whip the men into shape. On September 8, 1944, Nicklin, now 29, took command of the battalion and was made a Lieutenant-Colonel.

As expected, Nicklin was tough to the point of some accusing him of being tyrannical. Despite this, he got the respect of his men for not taking the easy way out as a commander. he was by their side for even the most dangerous activities, including visiting them on the front lines and participating in dangerous nighttime reconnaissance.

On March 24, 1945, the 1st Paratroop Division was part of the air invasion of the Rhine River near Wesel, Germany known as Operation Varsity.

Nicklin was the first man out of the plane, but his parachute got caught up in a tree and he never reached the ground. His body was found two days later with a number of gunshot wounds to the abdomen. He is buried with his parachute in Groesbeek Canadian War Cemetery, Netherlands.

Eileen Nicklin had moved back in with her parents at 538 Rathgar Street at the start of the war with their one-year-old son, David, who Jeff had never met. She eventually remarried and died in March 2013.

Some other Bombers who enlisted and became officers included Andy Bieber and Andy Currie, both of whom returned home safe. Martin Platz was captured in 1941 and spent four years in a German prison camp. He tried out for the 1945 team, though it does not appear that he made it into the lineup.

The Great Fritz Hanson became the sports officer for Military District 10 (Manitoba) and was a player-coach for the Army football team.

For his wartime actions, Nicklin received a Mention in Despaches for his leadership during D-Day and was made an an Officer of the Order of the British Empire (OBE) months after his death.

Tributes also poured in from the football world.

Former Bomber manager Joe Ryan penned a tribute to him in the Winnipeg Free Press which he concluded: If Winnipeg football people are as I know they are, they will some day create an athletic memorial to the memory of one of Winnipeg’s finer athletics and one of God’s finer gentlemen.A Tribune sports editorial stated: "...Jeff's worth was never measured in touchdowns or in the number of times he hit the newspaper headlines. His worth was measured in team play and unquenchable spirit."

Bomber coach Reg Threllfall said of Nicklin: ""He was the kind of boy you only run across now and then. You couldn't beat him down ... he always figured we would win even when we were ten points behind in the last quarter. Adding, "He was never out there for himself."

Threlfall even penned a poem to honour the man:


In September 1945, the 1st Canadian Parachute Division donated a trophy bearing Nicklin's name to be awarded to the most outstanding player in the Western senior rugby football league. After the CFL was formed in Winnipeg in 1956 it kept the Jeff Nicklin Memorial Trophy to honour the most outstanding Western Division player and it is still presented each year.

Interest in Nicklin was revived on the local sports scene in 2004 when he was inducted to the Manitoba Sports Hall of Fame.

In 2007, the 1st Canadian Parachute Division, War Amps and CFL rededicated the trophy in Nicklin's honour. It included the production of a tribute video about his career, see above.

Related:- Jeff Albert Micklin Canadian Virtual War Memorial
- Jeff Nicklin: Hero of the Gridiron and the Battlefield The War Amps
- The 1st Canadian Parachute Battalion Preservation Association
- For more on Nicklin the commander, see Boys of the Clouds: An Oral History of the 1st Canadian Parachute Battalion by Boegel and  Bradbrooke, Nicklin and Eadie – A Tale of Command Colonel Bernd Horn.