A look back at Souris' Swinging Bridge ! 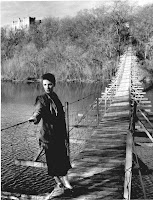 Souris' swinging bridge has been a landmark in the community since 1904. After being destroyed in the 2011 flood it was rebuilt and opened for a trial run on the August Long Weekend. The official opening will take place on Saturday, August 17, 2013.

Here's a look back at the history of the longest pedestrian suspension bridge in Canada.

The idea for such a bridge dates back to 1904 and a man named William Henry Sowden, (also here and here.)

Sowden was a merchant and land developer in Millbrook, Ontario, nicknamed "The Squire" because of a large mansion he built for himself on the outskirts of town. After one construction project burned down and a number of planned subdivisions never materialized, he formed the Millbrook Colonization Company in 1880, (while he was Reeve of the community.) Other principals included lawyer J. N. Kirchoffer, Major S. G. Fairblough and  investment bankers Woods and Kells.

Later that year he came to Manitoba on behalf of the company to scout out a location for a new settlement. He chose a number of sections of land in the Souris region. In mid-April 1881 a train left Millbrook, Ontario for Manitoba. Aboard were: Sowden, his wife Mary and 18 year-old son Fred; J. N. Kirchoffer and family; and about 30 new settlers, many of them Irish immigrants. They arrived at their new home by the end of the month.

In the years to follow more settlers arrived and the hamlet and farms around it began to prosper. On November 2, 1903 Souris was incorporated as a town. (The R.M., named Glenwood after Sowden's Millbrook Home, had been incorporated back in 1883.)

Sowden owned a large piece of undeveloped land across the river from the townsite that he and son Fred wanted to subdivide for a residential development called Idyllwild. The price they could fetch for the lots would, of course, depend upon how easy they were to access. Their only solution was a bridge.

The pair hired the Page Wire Fence Company to build the structure. One local man who worked on it was Charles Watson, a long-time train engineer who lived in the town.

Page was based in Michigan but had a Canadian subsidiary in Walkerville, Ontario and a Winnipeg office on Market Street. They were famous for their woven wire fencing but also dealt in wrought iron and industrial-grade cable.

Construction took place in April 1904 on a simple cable, rope and wood plank structure. It turned out to be a bit too simple and was no match for strong winds. Additional guy wires were soon added to give it more stability.

In 1907 "The Squire" died and the bridge was gifted to the community. It had already established itself as an area tourist attraction so the town invested additional money to further increase its stability

For decades the bridge stood its ground through the worst that Manitoba's climate could offer.

In 1961 one of the cables snapped due to rust, causing it to lean precariously into the valley below. It was soon repaired. In 1969 a spring flood came close to wiping it out but officials were able to raise it just enough to allow the ice floes to pass underneath.

In 1974 the bridge received a major retrofit. The worn, wood plank sidewalk was replaced by workmen Ray Wright and Lynn Kettles. Wright commented at the time: "The bridge has lasted 70 years and with this work should last a few more", (April 11, 1974, Winnipeg Free Press, p. 9.)

Wright's predication turned out to be wrong.

Just two years later the region was hit by its worst flooding since 1904, coincidentally the year that the bridge was built. On April 7 - 8, 1976 the Souris River rose 10 feet in just 24 hours. Attempts to raise the bridge failed as the water rose too fast. It broke through the town's dykes, destroying homes and business and washing out roads. It also swept away the 72 year-old swinging bridge.

Replacing the bridge became symbolic of the town rising again. There was also a financial impact as it was estimated that 5,000 people came to cross it  every year. Within a week fundraising ideas were being discussed. 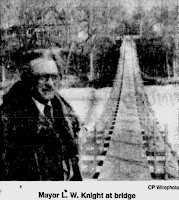 The summer of 1976 was dedicated to raising the money needed to replace the structure. It ended up costing $18,000. One of the major upgrades was to increase the thickness of the cables from three-quarters of an inch to one inch. The swinging bridge reopened on July 10, 1977 during the town's annual fair, (Winnipeg Free Press July 6, 1977.) 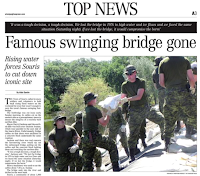 In April 2011 spring ice floes damaged one of the bridge's supports which forced its temporary closure. As spring continued, things went from bad to worse as the river continued to rise.

On July 3, 2011 at 7:30 a.m. officials were forced to make the call to cut the bridge loose. They feared that if the water took it away, it might take part of the town's dyke with it.

As in 1976, it didn't take long for town officials to start planning for its replacement. This time 90% of the cost would be covered by government flood disaster funding.

In April 2012 Stantec provided the town with a number of concept drawings. The design was fine-tuned over the summer and on Christmas Eve 2012 Souris town council awarded the $3,938,591.59 (plus GST) construction contract to WBS Construction of Winkler.

To adhere to modern-day safety standards and insurance requirements a number of upgrades were made. Most notably, the new structure stands 1.7 meters higher than the old one, enough to handle a 300-year flood. It also has a capacity for 1,000 people and is illuminated for safety.

The new bridge opened for a trial run on the August Long Weekend 2013. The official opening will take place on Saturday, August 17th.

Related - History:
Illustrated Souvenir of Souris (1902)
Biography of W H Sowden in A History of Manitoba: Its Resources and People (1906)
The Souris Plains: From Pemmican to Wheat (1967)
Early Days in Souris and Glenwood (MHS, 1954)
A Stroll Across Our Swinging Bridge (MHS, 1957)
Souris, Manitoba - Our Past

choose the right design, image, text and more for the banner and have it printed for your needs. Ensure that the fonts are clear easy to read, the images and the colors are stunning in order to make it stand out from the crowd without having to spend a lot of money.
safety fence