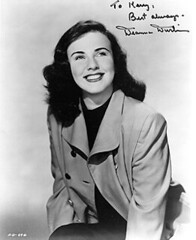 Some sad news from the world of entertainment. Deanna Durbin, dubbed "Winnipeg's Sweetheart" by local media back in the day, has died.

Born at the Grace Hospital in Wolseley on December 4, 1921, she only lived in Winnipeg for the first two years of her life. Thanks to extended family, including her beloved granny, she kept a strong connection through her early years of fame. 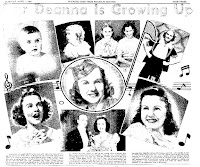 The Depression-weary city delighted in following her career. It began as a child singing star on U.S. radio which led to co-starring with Judy Garland in her first film at MGM and culminated in a string of box office hits with Universal in the 1940s that Hollywood lore says saved the studio from bankruptcy.

On top of being the top-paid actress in Hollywood for much of the 1940s, she was also in great demand as a singer, wooed by some of North America's top opera companies to join them.  Disillusioned with Hollywood she battled Universal in court in 1949 to end her contract. The following year she gave up stage and screen to live a reclusive life in France and raise a family. 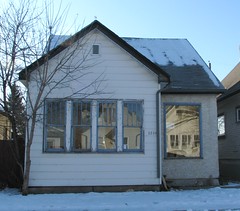 Back in 2011, I wrote a three-part history of Durbin and found a few interesting facts about her connections to the city.

Though her Hollywood biography stated that she was the daughter of a real estate broker and the family lived in St. Vital, she in fact had more humble roots. Her father was a machinist and labourer at the CPR Weston Shops and the family lived just meters from the yards.

Deanna Durbin's Winnipeg home for those two years still stands. So does "Deanna Durbin House" in St. Vital. It was a wartime charity fundraiser that she was involved in raffling off in 1944.