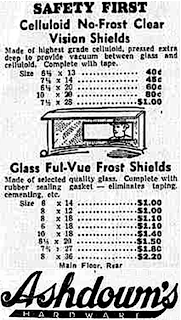 Here's a test to see how old you are: do you remember car window frost shields ?!

For those that don't, they were rectangles of plastic with a raised adhesive strip around the entire edge. You stuck them to the inside of your car windows and they prevented condensation from forming and becoming frost. If you want to get technical about it, here's a 1941 patent for a frost shield that explains how the work in excruciating detail !

Frost shields burst onto the automotive scene in the winter of 1926 - 27, long before front and rear window defrosters were a gleam in the eye of automotive engineers. They were soon a standard part of  your basic winter tune-up, along with radiator grill covers and winter anti-freeze.

The first shields were actually a thin piece of glass that came with a rubber gasket and a jar of adhesive. It wasn't until the late 1940s that celluloid versions were advertised. Soon after, there were electric versions that used heated wires running through the glass to keep them frost free, (see the image of the Stearn's electric frost shield below.)

In 1937 it became law in Manitoba that your windshield, rear window and front-row side windows had to be fitted with frost shields from December 1st to March 31st. The law was updated a number of times to tinker with the size and placement of the shields. When spring came, the car owner had the unenviable task of trying to remove what was left of the shield and its adhesive residue.

As windshield defrosters became more commonplace in the 1950s and rear window defrosters in the 1970s, the demand for frost shields diminished. You might be surprised to know, though, that their use is still mandated in Manitoba's Highway Traffic Act:


57(2)  The windshield, rear windows, and windows at both sides of the driver's seat, of every motor vehicle at all times between the first day of November in each year and the thirty-first day of March next following, both dates inclusive, shall be equipped with adequate frost shields of a size and type that will prevent or minimize the condensation thereon of moisture in the atmosphere and allow the driver to have a view sufficiently clear and unobstructed to permit him to operate the vehicle with safety to other persons and vehicles on the highway, unless the vehicle is otherwise so equipped or constructed as to secure a like result. 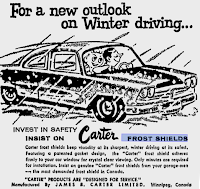 
As you might suspect, Winnipeg was a hub for the manufacture of frost shields.

Until 1934 frost shields were imported to the province, mainly from the U.S.. That year, the Electric Heating and Manufacturing Company of Winnipeg showed off their patented Ful-Vue Glass Automotive Frost Shield at the Industrial Exhibition.

In the mid-1940s there were at least four companies that made them. James B. Carter Ltd. (above) was likely the largest and sold them across the country. Through various mergers the company became Temro Phillips which still manufactured car interior heaters in Winnipeg until the plant was closed in 2012.

In 1951 Del Richardson purchased the name and equipment from the defunct Stearn's Automotive Products of Minnesota and set up shop at 666 Arlington Street. Within a decade they were selling frost shields around the world and considered themselves the largest manufacturer of the product, anywhere. In 1962 the company moved to larger premises at 92 Gomez Street to keep up with demand.

In case you think that frost shields have disappeared into history, they haven't. They are still used in construction equipment, helicopters and out-buildings. The only company I could find that still manufactures them is, of course, right here in Manitoba. Check out Custom Tarps and Filters in Brandon ! 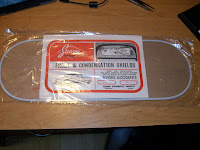 My dad's 1972 Dodge Dart was equipped with frost shields. Those must have been a strange sight to people from warmer climates...

In fact, my dad enjoys telling the story of how, during a road trip through the US in the mid-70s, a gas station attendant in a rough-looking part of St. Louis, MO admired his "bulletproof" windows!

They were a strange sight, I can remember the running joke to tell Americans that it was to protect against Indian bows and arrows or to strengthen against polar bear attacks etc.

The decline of the frost shield industry may have been the turning point in Manitobas economic fortunes.

Growing up in the 80's I remember my aunts car had these in the back side windows. Never really thought much of it at the time. Didn't know what they were till reading this post broguth back those memories.

I remember well the use of frost shields. I worked for Purves Motors on Lombard St in Winnipeg all those years ago. Service Advisor, so we sold a lot of Frost Shields.
One instance I recall well was a visit from a US customer who wanted an oil and filter change for his VW Van. It was powered with a Porsche Engine, which made it interesting for us chaps. He saw Frost Shields on several cars in the reception area and being interested he want to know what they were. I told him and as a memoir of his trip, he purchased a pair of EVERY SIZE we had in stock.
A great conversation starter for when he got back to California

Great throwback post, Christian! It makes me wonder why these window frost shields decreased in popularity. It seems like a very useful thing to have. Anyways, thanks for sharing!

Back in the 70's my boyfriend and I headed south to see what "spring break" was all about and he had some of these shields on his Dart side windows. We were asked what they were on various occasions and he told the curious that they were "map holders" :)

Our company of technicians, auto industry veterans along with Dig My Ride industry experts can produce 100% unbiased, knowledgeable reviews on a vast number of car merchandise and extras.

The Ceramic Professional array is created by a competent chemist with an advanced level of experience within the business defensive finish industry. Porcelain Paint Protection Expert continues to be particularly developed for auto substrates and is also always experiencing considerable tests for new and improved models to take the covering industry to new ranges.

This mirror is fantastic. Easy to put in, a great deal Townsend of presence and cruise ship time was quick.

I was trying to describe to some Vancouver colleagues what the "plastic patches" on the windows of my parents old car back in Saskatchewan was, and after some determined googling found this post that the fact that they were called "frost shields". Although, I don't recall our ever being removed - they stayed in place all year!

Thanks for sharing this information with us. Goood job.