If you're a cycling fan you no doubt loved this year's Tour de France as it had a little bit of everything. The first week of plains seemed to befuddle riders, resulting in a series of crashes. That gave way to some incredible mountain chases. In the end, Bradley Wiggins became the first Brit in the races 99-year history to step atop the podium. 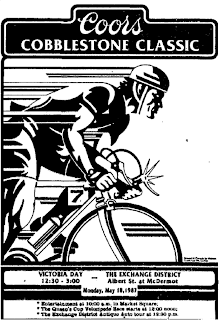 Not so long ago, Winnipeg was home to some thrilling races featuring some of of North America's top cyclists at something called the Cobblestone Classic. It was actually a collection of races and other cycling events that took place on Victoria Day weekend. Legendary Manitoba cyclist and amateur sports coach Peter Williamson is credited as the driving force behind its creation.

The first Classic took place in 1986. It was sponsored by Coors and sanctioned by the Manitoba Cycling Association. The events included a men's 87 kilometer and women's 65 kilometer road race along River Road and a men's and women's criterium race, (the women's criterium was an existing event put on by the Belgian Club.) There was a Commonwealth Games training camp the following week at the Velodrome.

The marquee event was the men's criterium, a 60k, 46 lap race around the Exchange District. It attracted racers from across the continent and was won that first year by Montreal's Gianni Vignaduzzi.

Team 7-Eleven on the cobbles ( see ian.ca on Flickr)

The following year the Cobblestone Classic and its extended 80k men's criterium attracted the attention of the professional Team 7-Eleven based out of the United States.

Coming off appearances at the 1985 Giro d'Italia and 1986 Tour de France, Team 7-Eleven dominated the 1987 Cobblestone Classic by taking the top four places. The following year they won again with Alex Stieda of Port Coquitlam B.C., who in 1986 was the first North American to wear the maillot jaune at the Tour de France. Stieda repeated in 1989.

Left: 1991 ad. Right: 1990 route map
In 1989 the Manitoba Liquor Control Commission (MLCC) decreed that as of 1990 motorized races could not be sponsored by alcohol companies. There was debate as to whether the wording included cycling. I can't find what the final decision was but, either way, the race had a new sponsor for 1990. Canadian Tire headlined and brought with it partners CCM and Coleman.

It was a good move for the company. By this time the race had established itself as a premiere event on the Canadian cycling calendar. The weekend had grown to include junior races, track events at the Velodrome, cycling workshops and, for a time, even a motorized go-kart race. The road race was moved to Cook's Creek / Birds Hill Park. Attendance was around the ten-thousand mark.

The top Canadian finisher in the 1990 Cobblestone Classic was a 17 year-old Elmwood High School student in the women's 40 km criterium. Clara Hughes surprised the cycling community by finishing 7th in just her second criterium. Hughes, of course, went on to become the first athlete in Olympic history to win multiple medals at both a winter (speed skating) and summer (cycling) Olympic Games.

After the 1993 race, Canadian Tire announced that it was not renewing its estimated $800,000 sponsorship package. Their departure also meant that the Cobblestone Classic was no longer a national tour event, eliminating the funding from the national cycling association. The Manitoba Cycling Association put the event on themselves, changing the criteriums to timed events. Though they found a number of local sponsors, they still lost $15,000.

While planning for 1995 Cobblestone Classic, the MCA ran into a number of obstacles.

Some merchants were demanding that the route be changed so that they could open on Victoria Day while the city balked at closing off two lanes of Main Street to allow for a detour. A greater reliance on volunteer and other low-cost labour meant that the ability to set up and take down barriers and other infrastructure quickly enough so as not to interfere with weekday traffic was a concern.

The major issue, though, was the lack of a major sponsor.

The need to pay officials, set up a proper route and to offer decent enough prize money to attract a high calibre of rider left nothing in reserve. Any unforeseen issues or expenses and the small group would be on the hook for big losses.

The decision was made to retire the Cobblestone Classic.

This list is compiled from Free Press reports. The level of coverage varied from year to year so some information is not complete. Let me know if you can fill in any gaps !

Wow ... nice article on the Cobblestone Classic. I raced it a couple of times in the 90's and followed it from about '87. You got the details pretty much right.

There was a brief movement to re-start it in in the early 2000's, but it never materialized. They considered holding it at the Forks.

The event worked really well in the 80's because there was a lot of money through the sponsorship ... which in turn provided a lot of prize money that attracted a lot of top riders.

Canadian Tire also had TV coverage through TSN. I have some of it on VHS tapes that I should try to get on youtube some day.

Again, nice work on this!

Fabulous article ! I was a friend of Peter Williamson's and have the highest amount of respect for him in many areas. He was absolutely a big part of the creation of this event. He had the vision of creating a 'Gastown Grand Prix' like event and to call it the Cobblestone Classic. I must add however that another guy was the real driving force in bringing this event to reality. His name is Jim O'Brien. Jim was involved in the Manitoba Cycling Association for a few years when his son was racing. Together with Peter's vision, Jim used his many corporate connections to bring this first class race to Winnipeg. He was responsible for bringing on Coors at the beginning, and then later Canadian Tire as major sponsors, as well as bringing in some pretty amazing pro teams.
If we ever want to bring that race back to Winnipeg again, he's a guy that we could really use

I watched as a fan in 1990 and 91 and I recall just being in awe sitting in the hotel lobby with Alex Steida beside me holding his bike. The crit was amazing as the circuit was through some old areas of Winnipeg and you would get great vantage points to watch the riders come head on into a tight corner with dust kicking up on a hot day, the shadow of the old brick buildings covering back straights of the race, and then the finish being narrow and at such high speed. 1991, was spectacular. Walton, racing for Motorola, came to the race on his own after just finishing 2nd in a major european time trial to Tony Martin. After about 15 or 20 laps, Walton, just accelerated in his saddle out of a corner from the front, hands on the hoods, and begins to ride off the front, and he just kept riding away, away and away. Never breaking form, never getting out of the saddle, just an absolute machine. About 20 laps later, he catches the back of the pack and works his way to the front again for the final 5 or 6 laps and then just won the race on the bell lap - phenomenal.