UPDATE 2019: Vera Tustin Gilbert was inducted into the Manitoba Sports Hall of Fame in 2019.

This blog post came about as the result of a collaboration with the family of Vera Tustin Gilbert who are nominating her for induction into the Manitoba Sports Hall of Fame next year. She had a huge role in the city's competitive swimming community for three decades but has been overlooked.

Tustin first appeared in the local sports pages in 1922 when, at the age of eleven, she finished in first place at a juvenile race hosted by the Victoria Ladies Swim Club (VLSC) at the Cornish Baths.

Three years later, she won the junior provincial 100-yard title with a time that was just one third of a second off the all-time provincial record. 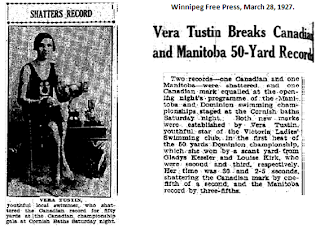 Tustin exploded onto the senior sports scene at age sixteen as a member of the Women's Amateur Swimming Club (WASC) based out of the Cornish Baths.

At just her second competitive swim meet in February 1927, Tustin won the Manitoba 220-yard (200-m) title by a ten-yard margin over her nearest competitor. The following month, she broke the provincial 50-yard record in a heat and then went on to break the Canadian 50-yard record in the finals.

At the swim club's awards ceremony in April 1927 the Tustin family took home a lot of hardware. Vera won the Elliot Cup for overall senior champion, her cousin Hilda Tustin won the Victory Cup for under-16s, and another cousin, Reta Tustin, took the Dingwall Cup for the best of the under-11s.

It appears that Vera then switched over to the Victoria Ladies' Swimming Club (VLSC), also based out of the Cornish Baths.

The club was created in 1916, just two years after the WASC, by former swimming star Miriam Taunton. She had been a provincial 50, 100 and 220-yard record holder and at times held the national records for the first two.

Vera Tustin dominated Manitoba's swimming scene in the late 1920s. Here are just some of her victories: 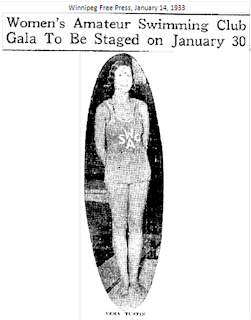 Vera was struck down with a serious illness (likely polio) that kept her from competitive swimming in 1930 and 1931. It was hoped that she would recover in time to start training for the 1932 Olympics in Los Angeles, but that did not happen.

At around the time Vera became ill, Tauntin left the VLSC to become the chief instructor at the new YWCA swimming pool and Vera went back to the Women’s Amateur Swimming Club which was now at the Sherbrook Pool.

In March 1932, Tustin again won the Elliot Trophy for holding the 100-yard provincial record for a 6th consecutive year. She also won a diving competition that year but there is no mention of her her doing any competitive swimming.

Tustin splashed back onto the swim scene in 1935 and found that her main competition was younger cousin Reta Tustin. At a February swim meet, Vera came a close second to Reta in the 100-yard race and lost the 220-yard race by just two feet. By October, Vera was back in form and beat out Reta by ten yards to take back the 220-yard championship, her final record.

She ended her amateur swimming career to become a paid coach with the Women’s Amateur Swimming Club and a summer swim instructor at the community of Grand Beach. In May 1936, she married Henry Gilbert, the brother of long-time teammate Ethel Gilbert.

Vera continued to coach the WASC into the 1950s. Provincial and national record holder Vivian King was one of her athletes. She also officiated swim meets and performed at swimming galas. Through the 1950s and 60s she provided aqua-therapy to children stricken with polio and other disabilities and the Kinsmen Centre for the Handicapped.


Vera and Henry Gilbert had two daughters, Marilyn and Victoria.

Vera (Tustin) Gilbert will be inducted into the Manitoba Sports hall of fame in a special 40th Anniversary Veteran induction on June 6, 2019 at the Club Regent Event Centre. Visit www.manitobahalloffame.ca for more details.

That is such great news. I updated the above post with a couple of extra photos and a link to the media release about her induction.
Christian