This is part three of a three-part series on the history of Burnell Street in Winnipeg. I am looking at the section from Portage Avenue north to Ellice. 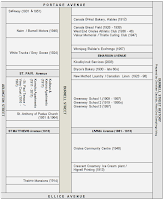 Above is a map of these locations or, if you prefer, follow along on Google Street View.

The Portage and Burnell area had a long association with Safeway. When the U.S. retailer came to Canada, (first setting up shop in Winnipeg), it opened dozens of stores from 1929 - 31, including one near Burnell and Portage.

In 1950 the chain announced the introduction of new "ultramodern" stores with adjacent parking lots to replace them. Both eras of Safeway stores stand almost side by side on Portage near Burnell.(For more on Safeway's history in Winnipeg.)

In October 1985 Safeway closed this location and moved to Polo Park. It was sold to a Safeway store manager named Harry Halbesma who opened Harry's Foods. In 2007 Harry's closed and it became a Food Fare. 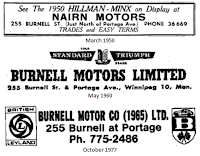 In July 1946 Nairn Motors Ltd., which began on Nairn Avenue in the 1930s, opened a dealership and service centre at 255 Burnell. In 1959 the name changed to Burnell Motors: "Your British Car Care Centre".

Bill Brown Bill Brown was the owner from 1964 until 1971. He then left to buy Motor Sales Ltd. In 1979 Motor Sales and Burnell Motors merged and the Burnell Street location closed.

Over the years Nairn / Burnell was an official dealership of Rootes / Hillman, Triumph, Austin, Leyland, Rover and in in 1964 became Manitoba's authorized dealer and service centre for Rolls Royce.

By 1979 the site was almost an acre in size, consisting of a sales building (now demolisehd) and lot. The current building was likely built in 1979. It was a Minit Tune garage until 1982 then Colony Auto Propane and Car Service until 1989.

Soon after, Harry Halbesma of Harry's foods bought the site. It was storage and for a brief time Harry's Urban Market. In 2005 Harry's offered to purchase the lane way between the store and 255 Burnell to allow for a store expansion but that was rejected by the city.

The building is back to its automobile roots as Terra Auto.

In 1911 the Canada Bread Company based in southern Ontario began an expansion spree to become a national bakery. This plant (left) and stables / garage (right) opened November 1912 and baked bread, buns and cakes until October 1988. It is now vacant. For more on the building see Burnell's Bakeries.

North of the stables from 1926 - 1939 was a baseball diamond called Canada Brad Field. It was home to the Winnipeg Commercial Diamond Ball League, Canada’s largest commercial baseball league with 17 teams. (Commercial leagues as in company teams played each other: Eaton's vs Dingwall Drugs etc.. 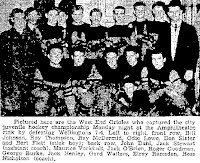 The Forerunner to Orioles Community Centre began as a single rink with two old boxcars as a clubhouse. Despite these humble surroundings they became a provincial hockey powerhouse thanks to coach Hoss Nicholson. (For more on the early Orioles and Nicholson.) In 1948 the land was sold to the Valour Road Legion for them to create a new hall and curling club. Construction began in June 1948 and it opened on December 15. When the Thistle's club burned down in 2005, Valour and Thistle merged under the Thistle name.

This building was designed by Wasiman, Ross and Associates. Its original features included an open air courtyard, (now filled in), and a 12 x 12 foot mosaic by artist Takao Tanabe, (sill there.) For more on this building.

The first ad to appear at this address was for White's Trucks, which existed from the mid 1920s to late 1940s. They serviced trucks and built truck bodies. 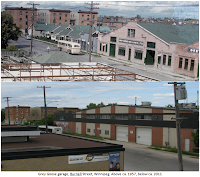 In 1952 Grey Goose, along wither her sister bus lines Thiessen and Transcona, moved in. The building has been renovated and rebuilt in stages over the years and it is unclear if any of the existing buildings exist. When Greyhound, owner of Grey Goose, was purchased by First Bus in 2007 the Goose name was amalgamated and the garage closed. The fate of the building, still owned by Greyhound, is uncertain.

I will have more on Grey Goose and this building in a future post.

This is a 128-bed boarding house for people from Nunavut coming for medical treatments. It's privately owned but operates under contract to the Nuncvut and replaced an existing facility on Stradbrook.

The architect, Robert Wrublowsky of MMP Architects, traveled to the north to look at examples of northern buildings before designing the space. Inside and out it is supposed to allow people from remote communities to feel that they are coming to a familiar place.

John Bryce and his sons opened this large bakery in 1930. The family ran a small bakery in Dauphin before coming to Winnipeg in 9122 to open their original commercial bakery at Nassau and Gertrude. For more on Bryce's Bakery. The original St. Anthony of Padua church dates back to at least 1951. In 1964 the church and rectory were sold, moved off-site and this church built. Over 500 people attended the dedication on December 20, 1964. It was (is ?) the only Hungarian Roman Catholic parish in the city.

In 1923 New Method Laundry opened on this site. In 1958 it became Canadian Linen Company. The site is part of what is now the Greenway School playing field.

The original Greenway School was built in 1909 and faced St. Matthews Avenue. In 1919 the building was expanded and a single-storey addition ("Number 2") was built on the grounds making it the city's largest elementary school. For more on the history of the Greenway Schools.

In the 1930s teacher Louise Staples was responsible for putting together a "school patrol" program to ensure that children were safe crossing the street in such a busy industrial area. The program quickly caught on with other schools and it was the nucleus for the national school patrol program. (For more.) The West End Orioles was offered a new site by the city but in order to receive funding needed to fall under the city's new Community Centre program. They left their boxcars behind for a war-surplus hut moved from the airport grounds. For more Orioles history.

This building was built by the Crescent Creamery as their central ice cream plant. At peak capacity it could produce 10,000 gallons a day. Crescent interned to move their main dairy facility from Lombard to this site, as shown in the above drawing, but soon after they merged with Carson's Dairy which already had a newer plant elsewhere in the city.

In 1942 Hignell Printing took over the space. The company, created in 1908 by Albert Hignell, was bought out in 1989 by Unigraphics. I will have more on this building in a future post.

Thelmo Mansions was built in 1914, the last building constructed by Thorsteinn Oddson. After being close for a number of year, it is currently being renovated back to rental apartments. For more on Thelmo Mansions.

From the 1930s to 1950s it was home to Eva Leadbetter, a Salvation Army woman who worked amidst the city's slums during the Depression. She ran a workshop out of her small apartment producing blankets, quilts and clothing for the poor. Thorstein Oddson was responsible for constructing four buildings along the north side of St. Paul Avenue. Check out my post on Oddson's apartments, another from a couple of years ago on the "Triplets of St. Paul" and one from late last year on the fire that destroyed one of the buildings on December 28, 2011. As this is the 100th anniversary of the remaining Oddson Buildings I will be bringing them together under one post in the near future !

Livinia was named in 1881. West of Arlington it was little more than a mud access road to the idustrial Burnell Street and Minto Armouries. In 1913 the street was renamed for the new St. Matthews Church, but ti took a few more years for the western sections to get aligned with St. Matthews and become one through street.

This street is named for Helgi Einarsson, (not the missing 's'). He owned a acreage with a dairy operation at this site from the 1880s to early 1900 then subdivided the land for housing.

A great piece of work, reminding us that the entire city has a history -- not just the government-designated "historic" parts.

Just a note about 310 - it's known as Kivalliq Inuit CENTRE, not Services. The KIS is a separate entity, also housed within the facility.