Troubled sailing: A look back at the MS Lord Selkirk II

Launched in 1969 to great fanfare, the M.S. Lord Selkirk II has had a long, troubled, money-losing history. Here is a look back.

Built for Lake Winnipeg Navigation Limited, she was launched June 9, 1969 by Lt. Governor Richard Bowles and Mrs. Roland Michener, (her husband the Governor General was to do the honour but, as per protocol, cancelled his visit when the provincial election was called.) The ship replaced the M.S. Keenora which carried passengers from 1897 to 1966 before finally being retired in 1973. It is now restored and part of the Marine Museum of Manitoba, just a few minutes away from the Selkirk Park slough that the Lord Selkirk II calls home.

In June 1969 the M.S. Lord Selkirk II offered a variety of cruises, its signature outing was the four-day Adventurers' Cruise that left Selkirk Dock and sailed to the northern edge of Lake Winnipeg, stopping in Warrens Landing, Grand Rapids, Berens River, Matheson Island and Gull Harbor. 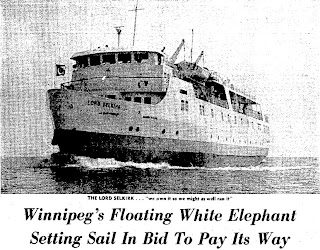 The Lord Selkirk II had ownership difficulties since before her first sailing.

The Lake Winnipeg Navigation Limited, (Dr. Kenneth McKenzie was president at the time of her launch), built the ship but because she cost over twice the original estimate of $600,000, the company went heavily in debt just to get her finished.

The Manitoba Development Corporation (MDC), a provincial crown entity, had to invest over $600,000 into the company to keep it solvent. In each of her first few seasons, The Lord Selkirk II lost hundreds of thousands of dollars and in 1971 the company failed. The MDC became the new owners.

Unable to find a buyer, the province set up a company called Venture Manitoba Tours to run the ship. It lost over $1.3 million until, in 1978, it was again put up for sale. This time there was a buyer called Sub-Arctic Expeditions Inc., a consortium of businessmen fronted by Harold Einarsson. They paid just $250,000 for the Venture Manitoba but lost $300,000 in their first year.

By 1983 the new owners were Bill Gauthier and Bill Harris. In 1984 Harris became the sole owner.

In 1986 she was bought by dentist Dr. Joe Slogan who immediately began to lobby the provincial government, unsuccessfully, for a gambling licence. (These were the days when the only legal gambling in town was the temporary casino at the Convention Centre.)
In a March 11, 1991 Free Press article, Slogan blamed the recently implemented GST, high gas taxes and the scare brought about by Manitoba's new drinking and driving laws for the demise of the business. As for his renewed push for a gambling licence, he said "If it (the response from the province) was no, we'd discontinue operations."

That's exactly what happened. After she was parked in Selkirk Park at the end of the 1990 sailing season, the M.S. Lord Selkirk never came out again. Eventually, she was put up for sale but because of the transportation costs, it took until 2010 to find a buyer - an overseas company bought her for scrap. According to the ship's memorial site she was resold in 2011 to a new, local owner.

That summer, some of the objects that were to have been removed and donated to the Manitoba Marine Museum were stolen by vandals. In June 2012, her bad luck continued when she burned in Selkirk Park, her home since 1990.

The ship was again sold for scrap but that company declared bankruptcy in 2014. In Summer 2011 Captain Hawchuk, owner of the Paddlewheel Queen and Paddlewheel Princess, announced that he was retiring and the ships are still up for sale.

The River Rouge was put up for sale by the owner in 2010 but he announced in 2011 that he had reconsidered and the ship would stay in Manitoba.

Very interesting post! I paid this place a visit as well, and took some photos under a dark stormy sky.. all those boats are an interesting scene!

Would be wonderful to see MS Lord Selkirk restored and on the water.

It would be interesting. I'd rather take a long weekend trip around Lake Winnipeg than go to Grand Forks !

I am not sure. I assume that salvage company still owns it - the ones who were going to tow it to china or wherever to dismantle.

I was six and standing on the south side of the slough with almost everybody else from Selkirk when the boat my dad welded together in tandem with another expert welder slid of its butter boards for the first time. I remember the waves and spray going right over top of the bridge and the wake soaking a great deal of people watching from the surrounding shore. It was spectacular and joyous unlike the bitter end it is sadly experiencing.

I was a bartender for the first summer of 1969. It really bothers me to see what the years and lack of maintenance have done to the ship. I still have strong

mr anonymous your story about your dad and another welder alone building the boat sounds like bs to me i was there from start to finish.i remember a whole lot more then two unnamed welders building the ms lord selkirk thank you.

I sailed as part of the last crew of the Lord Selkirk in '81 ... After seeing a doc. About the 110 year old Keewatin coming home from the US to Ontario tonight , it prompted me to look up the whereabouts of my Ship. It is so sad to see her demise. It was my start in the Hotel Biz. And a true coming of age adventure. However, I will be sure to send the old brochures and pics I've kept All this time to the Manitoba Marine Museum to keep her spirit alive. Hello to the Crew Captain G. Ian, Mrs Dunn, Michael, Wendy! Paula...Walter and of course Lynn., Jill Crawford

I worked on the Lord Selkirk II in the summer of 1973 and the summer of 1974 first as a storekeeper and then as a deck hand. It was the most fun a university student could ever have. I have some amazing memories and stories from those days. There were a lot of people who cycled through the ship - some only for a few days - some for several summers - but they all contributed to the Lord Selkirk II story.
Michael W.