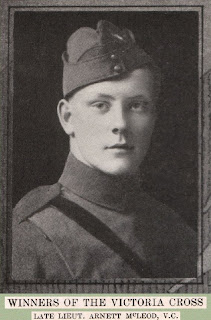 Alan Arnett “Buster” McLeod was born in 1899 to Dr. Alexander and Margaret Arnett McLeod of 292 Main Street, Stonewall, Manitoba. From an early age he displayed a fascination with all things military, (his mother was an historian which may have been an influence).

At the age of fourteen he joined the Fort Garry Horse and did odd jobs such as tend to the horses. When they left for the war McLeod was left behind.

McLeod tried enlisting with the Royal Flying Corps at age seventeen, but was rejected due to his age. Three days after his eighteenth birthday an acceptance letter arrived at his home. He immediately quit high school to join the war.

The death rate for 'fly boys' was high and new blood was desperately needed, so after just fifty hours of air experience he was off to England. By January 1918, he was flying missions in an Armstrong-Whitworth A.K 8 biplane.

On March 27, 1918, the McLeod and his observer A.W. Hammond were attacked by enemy planes while 5,000 feet in the air. This is the official account of what happened that day: 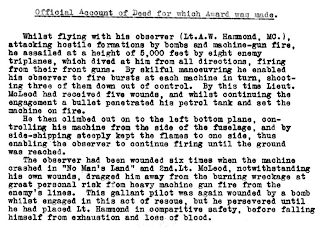 The plane landed in 'no man's land' and the two were initially considered missing. Dr. and Mrs. McLeod received notice from the war office stating: “It is with deep regret that I have to advise you that your son, Lieut. A.A. McLeod has been missing since yesterday morning…” (source).

Thankfully, the wreckage was soon discovered and the two men were transported to a first aid station then to a British military hospital. 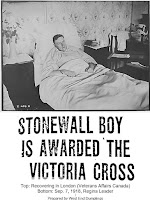 McLeod appeared in good spirits. He wrote from his bed that: "My wounds are absolutely nothing, though. they don't hurt a bit.....I'm as fit as a fiddle" (source.) He wasn't fine, though. He spent over four months in hospital, much of it in critical condition. His father, a medical doctor, traveled from Stonewall to be at his bedside.

On May 1, 1918, it was announced that McLeod and Hammond, who also survived, were to be awarded the Victoria Cross. It wasn't until September 5, 1918 that McLeod was well enough to be discharged from hospital to travel to Buckingham Palace to receive the medal from King George. 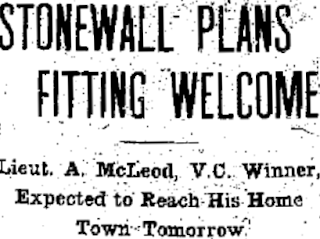 McLeod and his family then began the long trip home. They stopped in Toronto for a brief stay before heading back to Manitoba.

The McLeods arrived at the CPR depot on Higgins Avenue on September 30 at 10:20 pm. A crowd of hundreds had gathered out front to get a glimpse of the Victoria Cross winner.

At the request of the family and officials from Stonewall there was to be no formal ceremony in Winnipeg. The plan was that a delegation made up of the municipal councils of Stonewall and Rockwood and officials from the regional IODE and the Returned Soldiers Association would greet them privately on the platform and take them to a chartered streetcar bound for Stonewall.

VIPs, being what they are, couldn't help but line up on the steps of the CPR station for some impromptu speech-making. Former Mayor Waugh, Mayor Davidson and Brigadier-General Ketchen all spoke. When asked for his words, McLeod said only:  "I am no speech maker, you know. I want to thank you very, very much for your welcome. I only hope I deserve it."  (Winnipeg Free Press, October 1, 1918)

From there, it was to the streetcar and on to Stonewall. 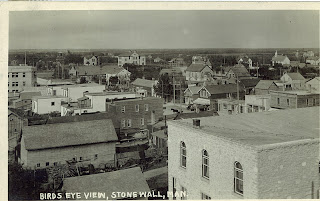 The streets were well lighted, while flags and bunting floated everywhere. Coloured lanterns brightened up the whole town and every house and building made a splendid showing of flags and colours.
(Winnipeg Free Press, October 1, 1918)


Despite arriving well after midnight, hundreds of people turned out to greet him. The McLeods were loaded into a car and paraded around town behind a pipe and drum band.
After an official greeting and fireworks display, people could sleep in the next day as Tuesday, October 1, 1918 was declared a municipal holiday in Stonewall.

Whilst recovering at home, McLeod contracted 'Spanish' Influenza that was sweeping throughout the world brought back by troops returning from the war.

'Spanish' Influenza was still new to Manitoba at this time. It recorded its first two deaths on October 3, 1918, two days after McLeaod's return. The victims were a pair of Quebecois soldiers who fell ill on the train ride home to Winnipeg.

This particular strain of influenza was most dangerous to young men and McLeod, in his weakened condition, was no match for it. He died of pneumonia, a complication of the influenza, on November 6, 1918, just five days before the war ended. He was 19 years old. 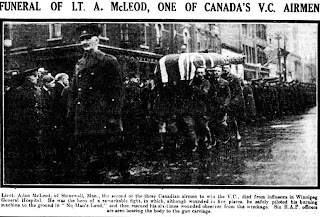 McLeod was brought to Thomson Undertakers which was located at 501 Main Street across from Winnipeg's City Hall. After a private service, R.C.A.F. officers carried his coffin to a gun carriage a block away. A Procession of the Dead continued to Main Street at Selkirk Avenue. From there, his body was transported to Kildonan cemetery by vehicle.

Alan Arnett McLeod is the youngest Canadian, and the youngest airman in the Commonwealth, to earn the Victoria Cross. 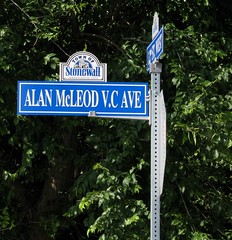 Fun fact: Arthur Hammond (a recognized flying ace of the English RAF, Military Cross with a bar) and McLeod became fast friends when they were paired. Their harrowing ordeal brought them even closer and McLeod invited Hammond to move to Canada. An adventurous sort, Hammond took him up on the invitation and moved to Stonewall. After McLeod's death Hammond resided in Winnipeg and worked for years here before retiring to Victoria BC. He also played a role as a training officer in the RCAF in WW2. This is an interesting read as to his letters home to family, typed and transcribed. They were digitized by the Comox Air Museum to which it appears he or his widow had donated it. Where the originals are is unknown. The last few pages address the infamous battle. An interesting read.

Search for Comox Air Museum to read up more on Hammond. I also have some of his observer photo notebooks, journal from the hospital recuperation and several articles with research I have done. Hammond married my great-aunt.