A history of the Arlington Street Bridge - Part 2 This is a four part series on the history of Winnipeg's Arlington Street Bridge commemorating the centenary of her construction, February 5, 1912.


Part 1: Spanning the TracksPart 2: Construction and ControversyPart 3: The Bridge as BugbearPart 4: So, What About That 'Nile Thing' ?
Part 5: Thoughts About the Future of the Arlington Bridge
Bonus: Driving over the Arlington Bridge to the 'Taxi' Theme

McArthur's push for the immediate construction of the bridge caused debate at the board of control.

It was claimed that some contractors looking to bid on the project did not have enough time to properly study the plans before doing so. The controllers were also worried about overextending themselves financially. If this project went over budget it would eat into numerous construction projects that they considered a higher priority or that were already underway.

Despite the cautions to leave the Brown and Brant Street Bridge project until the end of the year, city council, under bridge supporter Mayor Evans, charged ahead. 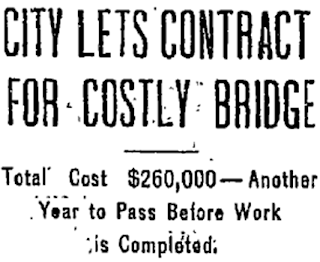 In May 1910 the city called for tenders for the new bridge. It was divided into two parts:

On July 5, 1910 the city announced the winners. Both were the lowest bids in their respective category. Local heavy construction contractor William Newman and Company was awarded $54, 720 for the construction of the piers. The Cleveland Bridge and Engineering Company of Darlington, England was awarded $205,160 for the superstructure.

As construction got underway the city continued planning for the new span.

In August 1910 council changed the name of Brown and Brant Streets to Arlington Street. It wasn’t a ‘new’ name as that stretch of road was already called Arlington from its starting point at the Assiniboine River in Wolseley to Notre Dame Avenue. (At the same time they made Nena Street a continuation of Sherbrooke).

The renaming caused some confusion as there was ANOTHER controversial Arlington Street bridge project in 1911 - 12, one that would have spanned the south end of Arlington Street across the Assiniboine River. This, too, was part of McArthur's vision to have Arlington Street span the city form end to end. This other Arlington Bridge was defeated the following year and never returned to the agenda ! 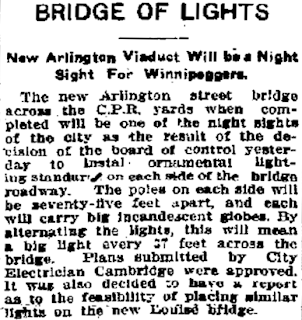 City Council decided to make the new bridge a “Bridge of Lights” and put out a tender for the lighting of the structure. Numerous large, incandescent globes would hang from ornamental poles to make it a nighttime attraction.

The city also redrew the streetcar route map creating a new cross-town route that would extend from Portage Avenue to Mountain Avenue via the new Arlington Bridge. The addition of a dual set of tracks was part of the construction contract. 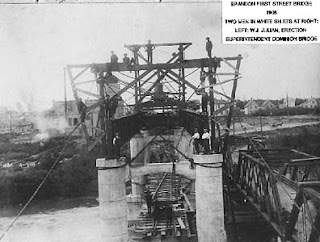 I could not find early photos of the Arlington Street Bridge. This is construction of the First Street Bridge in Brandon in 1908 to give a taste of what it may have looked like. (Source).

It appears that the project stayed on budget but not on time. In November 1911 the project was still unfinished but Controller McArthur said that he received assurances that the final piece of steel would be swung into place that week and that the bridge would be open for Christmas. It wouldn't open until February 5, 1912.

Controversial and behind schedule there was no fanfare on the opening day. The only city official that showed up that morning, it appears, was Controller McArthur. An opening ceremony was on hold until the bridge lighting project was complete, (which never happened).

The lack of ornamental lighting was the least of the problems that the Arlington Bridge would face in its first years of operation. It certainly needed an ally to save its reputation but no longer had one in McArthur. He ran for his fifth term as controller and won on December 13, 1912.

Days before the election he suffered what was likely a stroke while shoveling his sidewalk and never recovered. He died two days after the election. 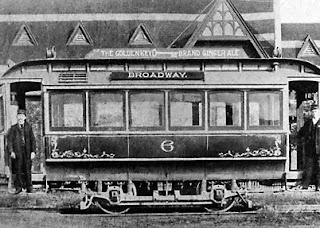 The major selling point for the Arlington Street Bridge was that it would act as a second streetcar link to and from the North End. Streetcar workers, however, refused to take a streetcar across the bridge due to safety concerns.

It's difficult to tell when the issue first arose. Though the track was laid and plans were drawn up for a new route the year it was built, it is not until 1913 that the first mention of running overhead wires and trouble with employees received mention in the newspapers. At first it was reported to be the 6% grade of the approaches that was the concern. As the issue heated up, however, it was found to be more than that. At the foot of each approach was a thoroughfare complete with overhead wires and, on the Logan side, a streetcar line. Once a streetcar began its descent there was no way it could stop in time if there was a problem at the bottom. Workers called it 'suicide' to make such a run.

This touched off a decade long legal battle involving the streetcar union, Winnipeg Street Railway Company, City of Winnipeg and the Public Utilities Commission. At various points orders were issued and withdrawn. (This article from The Voice in 1916 sums up the issue and the debate to that point).

The issue came to a head in 1916. The streetcar company went so far as to buy lighter cars, fit them with brake pads (something new to the market) and made provisions to have staff posted at the foot of each approach to signal traffic to stop. When the employees were again ordered to provide service they threatened a strike and the sides were back at square one.

It was shortly after that that the city gave up the fight and began working on a bus service plan for the bridge.

The streetcar issue came up one last time in 1924 with the same result. At a 1926 city council meeting some councilors complained that the Street Railway Company was seen removing track from the bridge to be used on St. Anne's Road. No streetcar ever ran on the Arlington Street Bridge.

And that lighting project ? Neither it nor the official opening of the bridge ever happened.