June 13, 2011 marked the 67th anniversary of the death of Andrew Charles (Andy) Mynarski. He died in battle at the age of 27 and was the first RCAF member to receive the Victoria Cross in World War II.

A couple of years back in my This Was Winnipeg entry for June 13th I wrote about the Mynarski Statue Project and have a good news, bad news update. 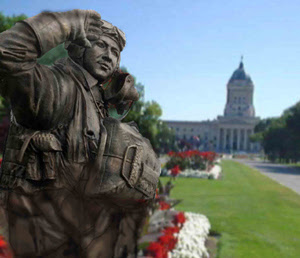 Source: Mynarski Statue Project site
The good news is that plans for the project are nearing completion. The group is consulting with local artist Charlie Johnston on the final design and seeking an exact location. A final confirmation of both is expected soon. 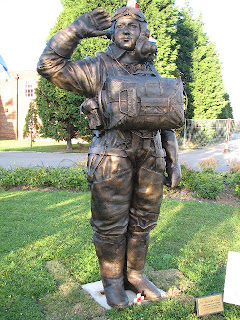 Durham Tees, U.K. statue
Source: Veterans Affairs Canada site
The bad news is that due to slow fundraising the group had to settle on a scaled down version of what was first envisioned. This has caused some ill feelings between Winnipeg and the group that unveiled that Mynarski statue in Northern England a few years back. (Yes, England has a statue to the Winnipeg war hero outside the Durham Tees Valley Airport where Mynaski flew out of on his final mission).

In the same month that the city fell all over itself to give Gene Simmons a key to the city, we had to settle on a scaled down version of a due to lack of interest and $30,000 or so.

Still, it is a victory that this project is being worked on at all.

- Last year a 50 minute documentary As Close as Brothers was released and is available free on MTS TV.

- Mynarski's medal and other artifacts are on display at Air Command Headquarters Museum in Winnipeg.

“Pilot Officer Mynarski was the mid-upper gunner of a Lancaster aircraft, detailed to attack a target at Cambrai in France, on the night of 12th June 1944. The aircraft was attacked from below and astern by an enemy fighter and ultimately came down in flames.

As an immediate result of the attack, both port engines failed. Fire broke out between the mid-upper turret and the rear turret, as well as in the port wing. The flames soon became fierce and the captain ordered the crew to abandon the aircraft.

Pilot Officer Mynarski left his turret and went toward the escape hatch. He then saw that the rear gunner was still in his turret and apparently unable to leave it. The turret was, in fact, immovable, since the hydraulic gear had been put out of action when the port engines failed, and the manual gear had been broken by the gunner in his attempts to escape.

Without hesitation, Pilot Officer Mynarski made his way through the flames in an endeavour to reach the rear turret and release the gunner. Whilst so doing, his parachute and his clothing, up to the waist, were set on fire. All his efforts to move the turret and free the gunner were in vain. Eventually the rear gunner clearly indicated to him that there was nothing more he could do and that he should try to save his own life.

Pilot Officer Mynarski reluctantly went back through the flames to the escape hatch. There, as a last gesture to the trapped gunner, he turned toward him, stood to attention in his flaming clothing and saluted, before he jumped out of the aircraft. Pilot Officer Mynarski’s descent was seen by French people on the ground. Both his parachute and his clothing were on fire. He was found eventually by the French, but was so severely burned that he died from his injuries.

The rear gunner had a miraculous escape when the aircraft crashed. He subsequently testified that, had Pilot Officer Mynarski not attempted to save his comrade’s life, he could have left the aircraft in safety and would, doubtless, have escaped death.

Pilot Officer Mynarski must have been fully aware that in trying to free the rear gunner he was almost certain to lose his own life. Despite this, with outstanding courage and complete disregard for his own safety, he went to the rescue. Willingly accepting the danger, Pilot Officer Mynarski lost his life by a most conspicuous act of heroism which called for valour of the highest order.”

If Mynarski would have known about the problems caused by both his statues, he would be upset. The statues may be different due to the fact that circumstances have changed , but this is no reason to be enemies. Hopefully the seeds of the Alpine Flowers from Italy and Germany that were absorbed and brought back to Middleton St George by the RCAF Lancasters of Mynarki`s Squadron and Ghost Squadron (428), could be present in Winnipeg and Teeside Durham Valley Airport (UK).