The end of the world ? Again ?

Sometime later today the end of the world could be upon us, though for many Canadians it started May 8 when the Tories got their majority government ;)

It's not the end-end, things won't truly melt down until October 21st. Still, it would set off an awkward "lame-duck earth'' period lasting almost as long as an NHL playoff season.

May 4, 1907 (source)
It's not the first time the "End of the World" has been predicted. Looking back in local newspapers American predictions of the Apocalypse have had a lot of play. The earliest reference I could find was in the Daily Nor'Wester in 1895 predicting that the dominoes would begin falling January 1, 1895 with the final one on April 1, 1901. How's THAT for drawn out !


This is the day set for the end of the world, by the Adventists. Up to the hour of going to press, there are not any serious indications of the prophesied dissolution of Mother Earth. But we felt serious all day about it. 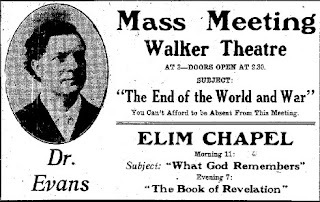 April 6, 1918, Winnipeg Free Press
Of course there were times when it may have seemed that the world was coming to an end. Wartime was brought doomsday-sayers out of the woodwork and into the newspapers, pulpits and theatre halls, as did The Depression.

On August 1, 1934 a somewhat exasperated "Tempora" from Neepawa noted in a letter to the Free Press editor:

Editor,—Is it not a fact that, extending over many years now, we see again and again prophecies that the end of the world, etc. will arrive shortly? Did Christ Himself not tell us that even He did not know; only the Father knew ? 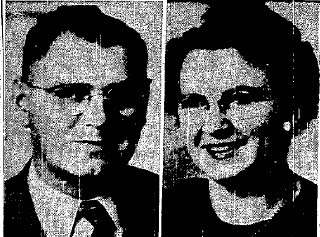 The McColloughs, Jan 26, 1952, Winnipeg Free Press
Of course, most people and media make light of these claims but they can have serious consequences such as in Winnipeg in January 1952.

Gavin and Lillian McCullough moved to the 100 block of Carman Street, Elmwood around 1940. They were a typical, quiet family, liked by their neighbours. Gavin was an accountant, Lillian raised their teenage son and was involved in numerous activities at the local United Church. In 1945 the couple adopted a baby daughter named Martha Louise.

In the late 1940s the couple began dabbling in more extreme religions. Neighbours said they were still quiet but if the topic of religion came up "...she (Mrs. McCullough) could talk the hind leg off a donkey." Lillian became increasingly vocal about her beliefs, including one that the end of the world was coming very soon.

December 1951, Winnipeg Free Press
The McCullough's suddenly dropped out of the United Church and became devout followers of evangelist and faith healer A.C. Valdez Jr.. He was a preacher from the San Fransisco area, son of a well known urban missionary and preacher named Adolpho C. Valdez.

Valdez Jr. came to Winnipeg at least once before 1951, a guest of Calvary Temple. In 1951 - 52 he went 'big time' with a North America wide preaching and faith healing tour that packed in thousands of people a night from Los Angeles to Calgary. One of his stops was Winnipeg and his devout followers the McCulloughs would be there.

There wasn't local media coverage of his visit but a CP story from February 26, 1952 while in Toronto quotes him as preaching:

"God will shake the whole countryside soon. He is going, to make fire come down from heaven. Dead people are going to rise. You-will see things that will almost make your hair stand on end."
January 23, 1952 was the last time neighbours spoke to Mrs. McCullough. She was shopping along Kelvin Road (now Henderson Highway) and was noticeable for her her lack of eye glasses and a bad cold. When asked about either she replied that the end was coming and wouldn't need glasses and needn't bother staying in bed and treating a cold.

Two days later neighbours called the police when they saw the couple 'acting strangely' on their front lawn at noon dressed in their bed clothes. When police arrived they escorted the couple back inside in and made a horrific discovery. 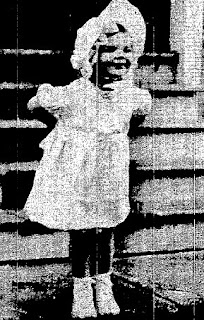 Seven year-old Martha had been bludgeoned to death with a medicine bottle then strangled. The McCulloughs told police that she was murdered during an all-night prayer session while trying to 'beat the devil' out of her in preparation for the end of the world the next day. (Their 20 year old son, it appears, was not home).

Lillian was initially declared too insane to stand trial and was sent to the Selkirk Asylum then to the psych ward at General Hospital. After almost five months recuperating she, too, had her day in court and was acquitted on the grounds of insanity. She was sent back to Selkirk for an indefinite period. 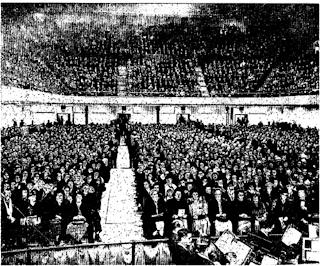 Valdez at Winnipeg Auditorium (source)
As for Valdez Jr., he was implicated in the case for fueling the impressionable and unstable McCulloughs. He strongly denied ever having directly communicated with the couple and said that he wasn't at fault if two of his followers "jumped off the deep end." Besides, the McCulloughs misconstrued his prophecy about the coming of Christ. It did not mean the 'end of the world' but, as scripture said, signaled the coming of 1,000 years of peace.

The media coverage dogged him as he was starting a two week long series of shows in Toronto. The stay ended up losing money due to smaller than expected crowds and donations. In December 1952 more bad press for Valdez when an Oklahoma teenager stopped taking her insulin after attending a really claiming that God would heal her. She died shortly after.

After that Valdez seems to disappear (even searching U.S. evangelical sites turns up nothing beyond 1953). This blogger, however, says that he was active until the early 1970s. 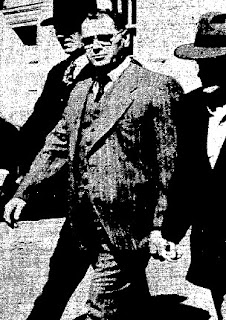 May 20, 1952, Winnipeg Free Press
What happened to the McCulloughs ? Gavin McCullough was released back into the community on October 20, 1955. I cannot find any further mention of him.

The last mention of Mrs McCullough was in a September 1961 Free Press story on another topic but mentioned in passing that she was still in Selkirk Hospital. I found, though, in May 1961 a 'Mrs. Gavin McCullough' of Colony Street was a Jumble winner ! Hmmm...

There is a sad aside to this story. In 1961 another shocking murder took place on Carmen Avenue - in the house right next door to the former McCullough house. A man murdered his wife with a knife then killed himself.

Let's hope that the world doesn't end and that even the followers of this U.S. preacher don't take him too seriously, either.

Now get back to your Victoria Day weekend barbeques - but eat fast, just in case !

The McCullough case also crossed my mind today. I ran across it years ago, purely by accident, while doing some research into how Winnipeggers reacted to the death of George VI on Feb. 6, 1952. The newspapers then covered murder trials in much greater depth than they do today, and I must have spent an hour reading every detail, feeling as much suspense as the readers in 1952 must have felt.

I seem to recall, either from the newspaper account or the chapter dedicated to the case in the book "Crime Stories", that the McCullough's university student son had "fled" the home the night before, and that an elderly boarder had also moved out in the days before the murder.

Gavin McCullough reportedly died in the mid-'70s, Lillian McCullough in the early or mid '80s. Their old house, since renovated but recognizable, is still there.

I have no idea whether or not the current occupants are aware of the house's past, or of the fact that, for a few weeks nearly 60 years ago, it was the most notorious address in Winnipeg.

What stirkes me about murders up to about the 1960s is how quickly everything played out. Murder, trial, sentencing all in a three month window. Looking into a murder from the 70s onward you often have to skip ahead years to get resolution.

When it comes to really bad crimes, like child murders, I don't post the exact address. I'd feel bad if someone living there now got creeped out about something like that !

The McCullough case is very personal to me. I am the granddaughter of Gavin and Lillian. I can tell you that my father, the 21-year-old son of Gavin and Lillian, left Canada right after Martha's death and led a quiet life with my mother and his three children. My grandparents lived with us for a few months in 1968 or '69, and I remember my grandmother teaching me how to embroider and trying to get me to eat the turnips she made for dinner one night. I remember a fun day on the Oregon coast with my grandfather. I thought they were pretty normal people, if a bit eccentric. My family traveled to Winnipeg in 1974 for a visit, and that is the last time I saw my grandparents. Gavid died in 1975 and Lillian in 1983. I have hundreds of photographs of the McCullough family, many of which have my grandmother's handwriting on the back (and on the front, which is annoying). You'll be glad to know that none of the descendants of Gavin and Lillian are partial to traveling faith healers or "end-of-the-world" nonsense. Thanks for posting this. I hope people can learn from it.

Thank you for commenting. It's nice to get additional information from family.

I lived in that house. My family moved from England in May 1975. We moved into the house in the fall of 1975. I had some paranormal experiences in that house, as did my mum and sister. There was always an intensity to the home. I saw shadows and a ghostly figure. Once when I was in the basement I felt somebody touch my shoulder, I turned around expecting to see my sister, there was nobody there.
A friend once said they saw a young girl in the upstairs window. My dad was a none believer, we told him about our experiences. One Sunday afternoon there was a knock on our front door. I answered the door, an elderly lady asked if she could come in to ” look around” she stated she had lived in the house many years earlier. I asked my mum if it would be ok.? She appeared so harmless. She walked around, reminiscing .She mentioned that her young daughter ” went to see Jesus”. We thought the comment was odd. She left. When my dad returned home we told him about the interesting visitor. He looked surprised. He then told us an incredible story. Two doors down, my dad was friends with a retired homicide detective ( Al Webster). He told him about the homicide. The nice lady who visited murdered her daughter. He didn't go into details. I'm grateful for this. This is a story has lived with me until recently. I was telling a friend the story of the haunted house we lived in. She went to search the address on Winnipeg Homicides. She confirmed that there was a murder. On January, 25, 1952. Lillian and Gavin McCullough murdered their 7 year old daughter Martha Louise McCullough. I won't go into details, the murder was brutal. Despite hearing a credible story from my dad I never knew for sure if this event took place. Reflecting, I believe I protected myself from the truth. The murder would have occurred in my old bedroom. The scene was horrific. I am now 57 years old, I have read everything, I'm still shocked. I wonder who moved into that house after we left.? Have others had similar experiences.? I hope that Martha Louises spirit has crossed over.! RIP sweet girl.