Farewell to an East Kildonan landmark For sixty years the former municipal hall of the Rural Municipality of East Kildonan stood at 755 Henderson at Helmsdale. There's little left of it now.
I feel a bit of a twinge as I've spent many an hour at EK - Transcona Community Committee meetings 'back in the day' - a couple of which went well into the wee hours of the morning ! Built in 1951, the architects were Green, Blankstein, Russell and Associates who went on to design some very prominent buildings such as Polo Park Shopping Centre, the Manitoba Museum, the Manitoba Planetarium and Winnipeg International Airport.

The opening of the new hall was a bright spot for Mayor J. L. Bodie and municipal officials in what was a disastrous year for East Kildonan.

In early May 1950, five hundred volunteers were busy reinforcing a half-mile long sandbag dike built the previous week when word came that there was been a breach up river. Workers had to scramble for their safety and within a short time the wall was destroyed and sections of East Kildonan began to flood. "It's enough to break your heart" said one of the last volunteers to leave the line. 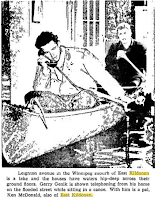 Regina Leader Post, May 16, 1950
The flood and the resulting cleanup and infrastructure repair and replacement would take years to complete.

There were other headaches as well.

Mayor John Leslie (Les) Bodie was a long time advocate of amalgamation with the city of Winnipeg for the main purpose of lowering tax rates. He floated the idea in 1948 but as time went on, especially after a number of new projects and infrastructure replacement schemes were announced, the citizens of E.K. began to cool on the idea. By late 1950 the City of Winnipeg, which had created a committee to study amalgamation, was publicly pressuring Bodie to get off the pot, open the books for the committee to examine and make a final decision as to whether or not he was on board with the plan.

Throw in a home break-in spree and negotiations with the school board (teachers were seeking a new contract with a raise) and 1950 - 51 was not a banner time for the R.M..

The municipal hall's construction received approval from the Public Utilities Board and at the February 19, 1951 meeting E.K. council voted in favour of spending the $75,000 on the new structure, replacing their existing one at 425 Henderson Highway.

A Winnipeg Tribune (?) article from that summer said:

The building will be along ultra modern lines. It will have fluorescent lights and will be heated by steam….A very impressive appearance will be given the front of the building by the use of Roman tile brick. The upper story will be frame and stucco.
The building also housed a public health office police department. The R.M. never did amalgamate with the city in the 1950s. Instead, it became the City of East Kildonan in 1957 and the building became a city hall.

When council was reduced from 29 down to 15 full time members in 1992 more services and meetings were centralized at City Hall, away from community offices.

The city of Winnipeg vacated the building around 2006 and a long time tenant, the Good Neighbours Seniors Centre took over the space. When the Centre moved to the new Bronx Park Community Club in 2009 the city sold off the property.

There's no word on what will replace it. Is it seriously being knocked down without anything in the works to replace it? What's the rush?

Not sure. I trolled the Herald to see if there's anything planned and couldn't find a mention.

It's not on the city's books anymore so whoever is knocking it is a new owner. Perhaps the CIBC next door ? That's a weenie little bank with not parking. They could expand a bit.

Oh, parking, oh parking. The Devil inside all of us is parking, parking...