Looking back at The Paddlewheel

Today, HBC announced that their in-house restaurants are going upscale with the introduction of Oliver & Bonacini.

For some, the thought of finer dining at a department store is an odd thing but it's really going back to the roots of department store restaurants. In many parts of the world you would still go to a Clery's in Dublin for a nice meal or one of the larger Marks and Spencer's in the U.K. for something fast but enjoyable.

My parents came from Ireland, making us 'Eatons people', and I can remember going to a number of special celebrations ranging from Santa breakfasts to birthdays at the Grill Room with carved roast beef and Yorkshire pudding dinners ! 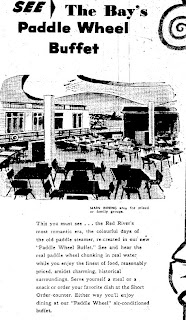 Winnipeg Free Press, October 28, 1954
The Paddlewheel opened at The Bay downtown as the 'Paddle Wheel Buffet' on October 29, 1954. It was part of a two year 'pillar to post' refurbishment and expansion of the store. Also added was the Rendez Vous (women's clothing boutique) and the construction of a multi-level parkade.

It brought the number of in-house restaurants to three. There was the café-counter style Jolly Canuck (basement), the upscale Georgian Room (originally on the fourth floor but by 1967 was on the fifth) and the family-friendly Paddlewheel Buffet (sixth floor). 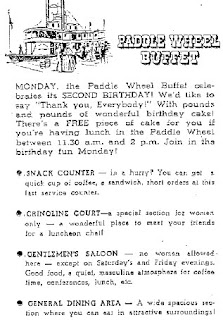 The Paddlewheel had four sections. A take away counter, a Gentlemen's Lounge, a women's-only Crinoline Room and the main dining area. The gender-based rooms doubled as rooms where special functions or social club meetings could be held.

In 1967 the main dining area was enlarged and the 'Paddlewheel' began to feature live entertainment. Sometimes performers in town to promote their records, (those were flat, plastic discs with music etched into a series of fine ridges !), did a show there. Examples include Jaye P. Morgan, The Banana Splits. 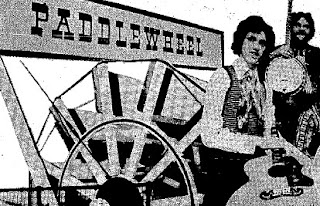 Bluegrass Week, 1971
Mostly, though, it was local entertainers such as Fabulous George and his Zodiacs and The Chicken Flats String Band that would perform at special theme weeks, ranging from a Salute to Britain, Bluegrass Week, Robbie Burns' Week and Metis Trading Days. The restaurant would also carry special menu items to fit the theme.

A feature until the late 1970s were seasonal fashion shows put on by a student council made up of representatives from each Winnipeg high school. They would act the musical band and the models. 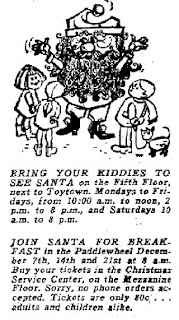 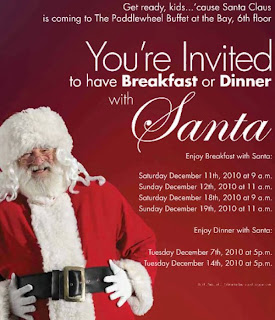 The longest running Padddlewheel feature has to be Breakfast with Santa which began in 1968 and ran until until Christmas 2010, (though us Eatons people knew that the REAL Santa went to Timothy's breakfast while The Bay Santa was just a fill-in !).

In recent years The Paddlewheel continued to be a money maker for the store and an old-school Winnipeg meeting place. It achieve some international attention when Guy Madden's film 'My Winnipeg' cast it as a tawdry night club and celebrated its orange jello dessert !

The Paddlewheel is dear to the hearts of many Winnipeggers, but it is indeed time for it to close and a new restaurant to carry the torch.

As it stands, it's a shabby cafeteria with awful food, canned soup, reheated frozen entrees, frozen hamburgers and waxy-tasting salad.

The Paddlewheel was wonderful in it's time, but that time is gone. Let's welcome a new restaurant into the space and not look back.

Ha ha ha. I have the same memories of Eaton's Grill Room and Timothy's Breakfast With Santa as you do.

I remember from my childhood how the Grill Room used to serve bowls of ice-cream made to look like little clowns, with a maraschino cherry nose and an upside-down ice-cream cone hat.

Looks like great (nostalgic) minds think alike - this was on my mind yesterday as well. I realize the "why" behind it all (I'm not one of those Winnipeggers completely opposed to change) but hopefully its replacement will create fond memories for diners as well, although, somehow I doubt it.

If the new concept doesn't fly you can be sure they'll yank it in no time flat, I'm sure one of the main reasons the Paddlewheel lasted as long as it did was for the nostalgia factor.

Sad The Paddlewheel's time has come, I have fond memories of the place as well. My dear departed 'granny' worked there decades ago.

On a side note, I just discovered your blog, and it is excellent, very interesting stuff and well researched.

Phenomenal post! I grew up in the country and didn't dine in either the Eaton's or The Bay during their respective heydays. In fact, I'm almost embarassed to admit this, but I actually didn't set foot in the Paddlewheel until a few months ago, when my wife and I came to see an African drum group perform there. This post, like so many others here and on your other blogs, brought me a little bit more up to speed on a civic institution that obviously many people here have fond memories of. Thanks so much!

I worked at the Bay in first year university. Think I had most of my meal breaks at the Paddlewheel.

While the history of the place can't be denied, I still think that the announcement represents an exciting opportunity to bring new people downtown who might not otherwise have made the trip.

. I have the same memories of Eaton's Grill Room and Timothy's Breakfast With Santa as you do.

Thanks for the comments ! I agree there's a lot of sentimentality associated with the old Paddlewheel
but for HBC to try to upscale the department store experience that getting back to fine eating is a great idea.