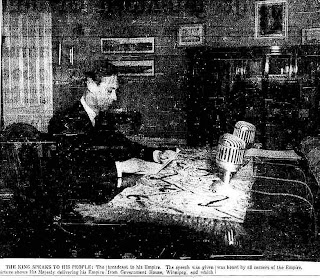 There is a Winnipeg version of 'the King's speech' and it took place less than four months before the 'wartime rally' speech featured in the Oscar nominated movie.

In Spring 1939 King George VI and Queen Elizabeth made a month-long Royal Visit to Canada. According to the CBC the couple were treated like 'rock stars' (obviously a modern reference !) with huge, enthusiastic crowds at every stop along the train route.

There were brief Manitoba stops at Brandon, Carberry and Portage la Prairie. Their main stopping off point, though, was Winnipeg on May 24, 1939 - Victoria Day !

Waving to the crowd from the balcony of the Legislature (source)
The Royals arrived at the CPR station at 10:30 am then went off to a 'meet and greet' reception at City Hall. From there it was the Legislature for meetings and a reception. Lunch was held next door at Government House and at 1 p.m. the King went to a broadcast room set up on-site to deliver a Victoria Day address to his 500 million subjects (give or take) around the Empire.


"Winnipeg, the city from which I am speaking, was no more than a fort and hamlet upon the open prairie when Queen Victoria began to rule. Today it is a monument to the faith and energy which have created and upheld the world-wide Empire of our time".

According to a reporter's note that Macleans discovered, the speech went off well.

At the CNR Station (source)

After a couple of hours of private time the couple and their entourage, which included Prime Minister King, Premier Bracken and the Lieutenant Governor, went on their afternoon program that included visits to Polo Park race track, Assiniboine Park, St. Boniface City Hall, Deer Lodge Hospital and Kildonan Park. From there it was back to the train station and by 7 pm they were back on the rails.
For that day, during the King's speech, Winnipeg was literally the centre of the Empire ! 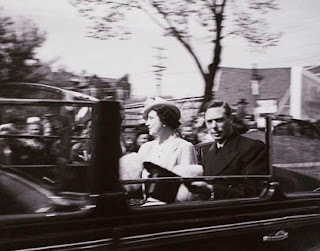 Here is the King's speech in its entirety, patched together from the Winnipeg Evening Tribune of May 24, 1939:

Also, you can hear original audio of the September 3, 1939 speech featured in the movie "The King's Speech". Unfortunately, I can't find audio of the Winnipeg speech.

A great source of photos, though some are quite dark: "Their majesties visit to Manitoba: A pictorial record of the visit of King George VI and Queen Elizabeth to the province of Manitoba on May 24 and June 4, 1939"

Also, some more about the Brandon stop:

The Royal Train was to pull into the CPR station at 9:50 pm the evening of May 24th. Expecting tens of thousands of visitors the city put on a day long affair of sporting events and other entertainment. Pacific was closed off and the platform was flood lit to allow the event to take place at the station.

The crowd was estimated between 9,000 and 10,000. Almost 7,000 were area schoolchildren who were brought in from around Western Manitoba to see the Royal couple. Aside from the schoolchildren there were 500 girl guides and boy scouts, a 300 member honour guard with representatives from each town in WestMan and a special meeting section for 'old timers', the pioneers who helped settle the area. Thousands of others lined the route and had come from as far as South Dakota.

The Royal party, which also included Prime Minister King, were greeted at the train by Mayor Young. The program was informal, just to meet a few dignitaries and government officials from the area. The couple were taken by the sight of such a large crowd, the largest in the West so far, that they held up the official program for a half hour while they wandered through the crowd.

The train pulled out around 11 pm and Brandon partied through the night at numerous social events, culminating in a dance at the airport: . "A dance at the Brandon airport and other entertainment features maintained the tempo of the celebrations with most of the adult younger citizens creeping to bed in the early hours of the dawn". (WFP May 25, 1939)

During one of the dances the mayor received a telegram:"The Queen and I would like to thank all of the citizens of Brandon for the wonderful reception they gave us tonight. Signed, George RI"

Prime Minister King would record in his diary of the Brandon visit: "Wonderful cheering. A long bridge overhead crowded with people. The hour: 11 at night." (Source).

Lindor Reynold's column in the Free Press includes the audio of the Winnipeg Speech.

Very interesting tale - I bet not many people remember such things. Thanks for reminding us!