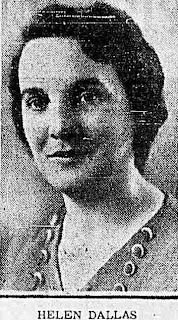 Helen Maude Dallas was born April 12, 1898 in Hastings, England, and moved to Winnipeg in the autumn of 1919. She attended Wesley College's new faculty of music, studying under contralto Mme McAdam Murray, a long-time prominent soloist and head of the Glee Club. 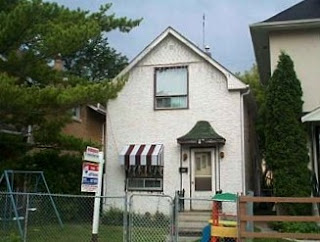 By 1920 Helen was married Joseph Dallas who born in Glasgow but came to Canada as a small child. He served with the Cameron Highlanders in World War I then became a postman but stayed active in the militia. In July 1926 the couple settled into a home at 682 Valour Road where they would remain for three decades and raise two children, Joan and Alan. 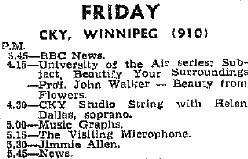 Her vocal talent shone and she soon began making a name for herself as a soloist performing at hundreds of concerts and recitals from 1927 to 1957. Weddings, graduations, national meetings, concert venues, benefit shows and the like. In the late 40's she even hosted a radio show on CKY Radio. 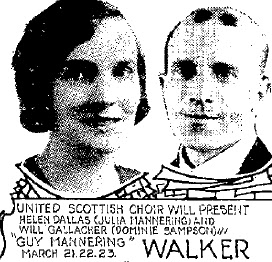 March 9, 1929 Wpg Free Press
Helen added acting to her repertoire and was soon a popular feature on the local stage. She performed numerous times at the Walker, for instance. In the 1950s she was on Rainbow Stage. Gene Telpner, Free Press arts reviewer, said of her performance in the 1959 Rainbow Stage production of Guys and Dolls:
"This reviewer saw the Broadway production of the show, and there is no doubt that Winnipeg show stacks up with the best of Broadway.... Helen Dallas was just right as General Matilda B. Cartwright"
(July 21, 1959, Winnipeg Free Press).
A constant in Helen's career was that she performed for good causes. Through the Depression she sang at events for the homeless and unemployed dinners. During WWII she appeared at bases and training centres around Manitoba to sing for the troops. She continued to sing for 'the boys' right up until the mid 1980s as a volunteer at Deer Lodge Centre. 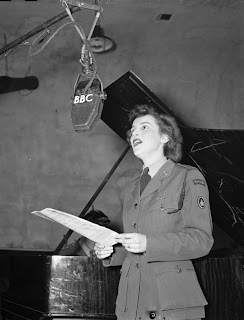 Joan Dallas joined a touring military band during WW II, performing for troops at home and abroad. While on tour she met and married former The Happy Gang member and orchestra leader Robert Farnan. 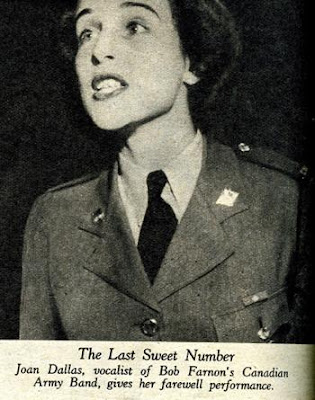 July 28, 1945 (source)
The couple settled in England, Joan landed a BBC radio contract in 1946 and Farnham continued on as a composer and conductor, working with stars on both sides of the Atlantic, from Vera Lynne and Gracie Fields to Tony Bennett and Frank Sinatra. Th couple visited Helen and Joseph on Valour Road during a return trip in 1953.

In the mid 1950s Helen and George moved to Raglan Road and spent summers at their home in Victoria Beach. Joseph died in 1970, (there is an entrance scholarship for SJR in his name administered through the Winnipeg Foundation).

Helen continued to live on Raglan, becoming a community activist in her later years fighting for green space in her neighbourhood. She publicly butted heads with lawyer / developer Aubrey Halter over the possible development on a piece of land, Halter Park, along Omand's Creek in Wolseley (Halter referred to her in the local media as 'a pest').

In the early 1980s her activism and personality led to a couple of appearances on CBC Radio's Morningside and interviews with Peter Gzowski.

April 16, 1983, Winnipeg Free Press
In 1981 Dallas approached neighbour and pianist Marcelline Moody with the idea of doing a full length recital. For months the two worked on the program, Dallas said of the musical pairing: "I think it was just one of those things that are meant to be." Dallas credited her continued performances at Deer Lodge for keeping her voice in good condition and on Sunday April 17, 1983 at the age of 85 Dallas took to the stage in the Murial Richardson Auditorium at the Winnipeg Art Gallery.

Moody, who became a close friend of Dallas', recalls:"Helen was an amazing woman with a beautiful voice and a keen sense of social responsibility. She was generous and had great dignity. We had a lot of good times together."

Dallas perfromed once more at the Art Gallery the following year as part of the Wednesday Morning Musicale program with accompanist Phyllis Holtby.

On May 26, 1993 Helen Maude Dallas died at Princess Elizabeth Hospital in Winnipeg. She was 95 years of age.

Related:
"It Made Them Forget About the War For a Minute" Canadian Army, Navy and Air Force Entertainment Units During the Second World War

Thank you for sharing this story! Helen is my great grandma. I knew some of these stories but not all, so it was great to read this article! Cheers! :) Rebekah

That's great ! Email me at cassidy-at-mts.net. I have some recordings of Helen in MP3 that I can send to you !