Yesterday, the federal Historic Sites and Monuments Board of Canada designated A.A. Heaps and Rabbi I.I. Kahanovitch as "individuals of national historic significance".

I have written a bit about Heaps in the past but had never come across Kahanovitch's name before so I thought I would look into the man that the Board says:

...transcended religious and secular Jewish factions to become a community leader throughout the Prairies, encouraging the growth of Jewish educational, social and religious institutions, such as Winnipeg’s Talmud Torah, for the transmission of Jewish life and faith and the betterment of his community. He fostered the unity of Canadian Jews and underscored the significance of the community’s concerns through his active role in the founding of the Canadian Jewish Congress. 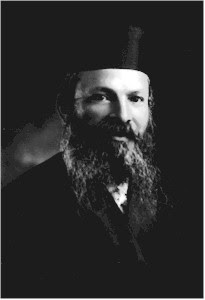 Israel Isaac Kahanovitch was born in Poland in 1872 and emigrated to Russia as a young child. At the age of ten he attended rabbinical school and was ordained at the age of 20. While in Russia he met future wife Rachel. The two married, emigrated to Scranton, Pennsylvania for a year and then onward to Winnipeg in 1906. 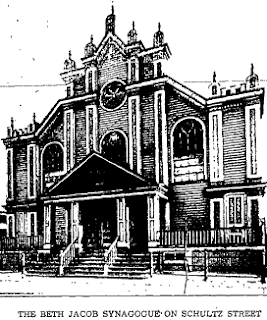 Beth Jacob on Schultz Street (source)
Winnipeg’s Jewish community was beginning to grow rapidly. In 1901 there were 1,156 Jews in the city and by 1911 the number was 9,023 making it Winnipeg's largest ethnic group, and it remained so for another 20 years (source). The city had been without a Rabbi for three years and much work was needed to establish services and walk the line between various factions in a not very homogeneous community.

His first task was to build a school and in 1909 the Hebrew Free School was created at Dufferin Ave and Charles St, a larger location came in 1912 Flora and Charles. In the years following, a Jewish Orphanage and Old Folks Home were also created.

In 1914 he was appointed chief Rabbi for all of Western Canada.

Winnipeg Evening Tribune June 25, 1945
When he died in June 1945, Kahanovitch's funeral procession of hundreds of people went from the Beth Jacob Synagogue on Schultz Street and stopped at each of the above insititutions before finally arriving at the family home on 281 Flora Street where the Rabbi and his (now late) wife raised three sons and five daughters. 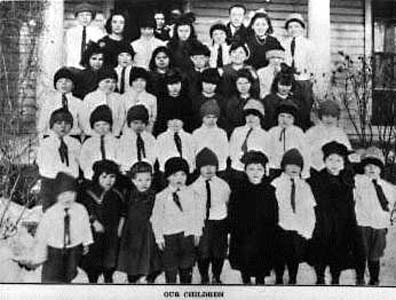 Children at Jewish Orphanage (source)
"The poor and the lonely found in him their champion. All factions and the community at large discovered in him an echo in his great heart” Rabbi Wohlgerlenter at funeral of Rabbi Kahanovich.

The 100th anniversary souvenir of Jewish emancipation in Canada (1832-1932) and the 50th anniversary of the Jew in the West
Israelite Daily Press, 1932