A house that has always intrigued me is 524 Balmoral Street, just south of Sargent Avenue. It is not on the same grand scale as nearby homes on Young or facing Central Park. It is this coziness and mansard roof that gives it its charm.

Second Empire architecture had been a popular style in Ontario for decades, but was falling out of favour by the 1880s when residential development in Winnipeg began to take off. For this reason it is rarely seen in Manitoba and further West.

According to the Winnipeg Assessment Map, this 904 sq ft home was built in 1886 which makes it a pioneer home of the city's West End. Wesley Hall, for instance, opened in 1896 and the patch of swampy land that would eventually become Central Park wasn't even purchased by the city, much less developed into park space, until 1893.

Residential development began creeping this far west in the 1880s as commercial activity crowded out the residential neighbourhoods on the west side of the Exchange District, (a last example of that residential district is the ca. 1882 Kelly House on Adelaide Street).
This West End neighbourhood behind it did not start developing until around 1904. 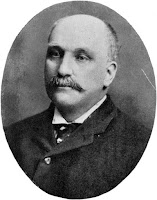 It is unclear who the original owner of this house was. The Henderson Directories of the 1880s do list a few homes situated on Balmoral Street from Portage to Sargent, but do not include street numbers.

Lillian Gibbons, who researched the house in 1945 for her "Stories Houses Tell" column, noted that one of those early residents of Balmoral Street was architect George Browne and suggested that he might have desinged it and lived there. (She may be right. Browne, from Montreal, practised out east before coming to Winnipeg and would have been familiar with Second Empire architecture.)

Browne worked in the city from around 1882 to 1904 and has dozens of buildings to his credit, many of them still standing today. They include Wesley Hall on Portage Avenue and the YMCA / Birks Building on Portage Avenue. 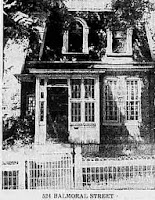 The first listing of an owner at this address comes in 1891 with E. C. Beavis, an accountant who was new to town. Two years later came flour and feed mill worker E. J. Brown. In 1895, it was James Jackson, a bridge builder and carpenter who stayed until 1904.

The house's first long-term owners came around 1919 with Otto and Mida Boutlier. He was a blacksmith and welder with Boutlier and Richardson's on Princess Street.

By this time, the children had grown up and in the early 1930s lived at home. George was a fireman with the City of Winnipeg and Myrtle a stenographer with Codville and Co..

The Boutliers lived there until 1943. What might have prompted the move to Toronto Street was a burglary that saw three bags of flour, a wallet and a $15 ring stolen from the home. 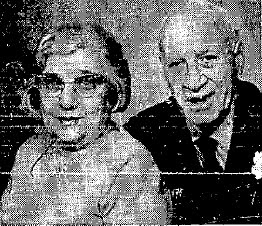 In 1944, the Mencini family, Patrick, Antonia and their son Frank, took possession of the home. Patrick was an employee of International Harvester at 404 Ross Street. They lived here until at least 1965.

An interesting aside, the Mencinis, seen above in their 50th wedding anniversary photo, had a double wedding. Her twin sister married his twin brother at the same ceremony !

In 1945, Mrs. Mencini was nice enough to give Lillian Gibbons an interview for her "Stories Houses Tell" column in the Winnipeg Tribune and we get a sense of what the home looked like inside.

Henderson Directories, which are only digitized up to 1965, show the Mencinis still living there at that time. Mrs. Mencini died in 2014 at the age of 105. 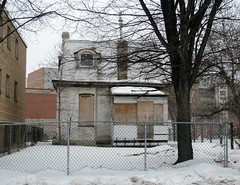 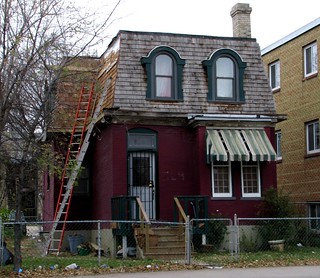 I cannot find any mentions of 524 Balmoral in the Free Press or Tribune since the 1950s, which indicates that the building had a quiet existence. Nobody lost in the wars, no fires or major crimes were reported as taking place at that address.
By the early 2000s the house had fallen into disrepair. The above photos are from around 2009 when the seemingly derelict building got a new dormer windows. Those repairs continued on through 2013 with a new paint job, roof and other repairs. (For more images of the house through the years.)

As of 2020 the house is still occupied and appears to be in good repair!

While 524 may have had a revolving door of owners, the neighbouring house at 520 Balmoral Street, (it's the empty gap between the two houses in the photo above), housed post office worker Robert Miller, wife Catherine and their seven children beginning in 1888 until his death in the mid 1930's. She remained there until 1942 ! 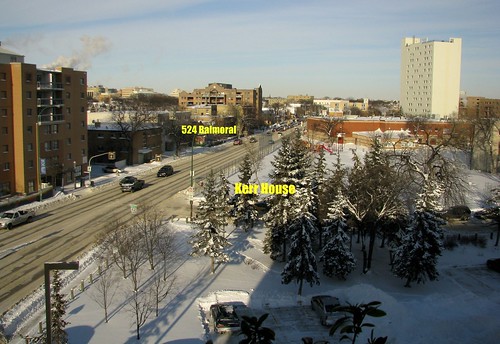 524 Balmoral had a near twin house just a block away on Qu'Appelle Avenue that was built a few months later.

Kerr House which I write about in more detail here, was built for Francis Kerr and family. He was the first principal of Carlton School and his neighbours included the likes of James H. McCarthy, Winnipeg's first chief librarian, and businessman / MLA Thomas Kellett. 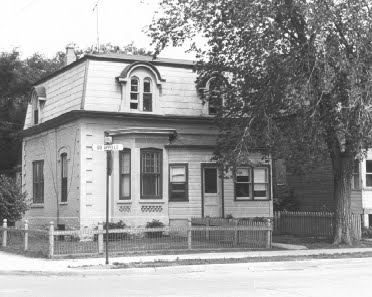 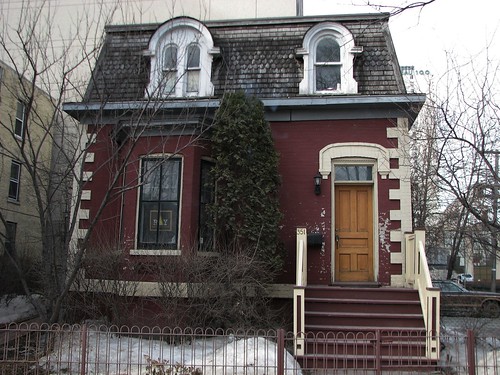 Above: on Qu'Appelle Avenue (source). Below: on Assiniboine Avenue


In the 1980s, Kerr House was threatened with demolition to make way for Sister Macnamara School. Its history was researched and it was found to be one of the few remaining Second Empire homes in Western Canada.

The home was purchased by the city and the cost of its move subsidized. It is now located on Assiniboine Avenue near Hargrave.

Wow, I just passed by this house this morning and I was thinking that it would've been a really nice house if it got fixed.

So glad that it's got a new lease on life.

I’ve been fascinated driving past this house for years. My 8-year old granddaughter Liviah & I refer to it as “The Storybook House”. I want her to write me a story of a family living in that house. Now I know that there were many more families whose stories were actually lived in that house. Wish someone could tell me one. Any descendants out there who could? The house has a magical quality. It reminds Liviah & me of the house in the movie “Up”, whose owner resists city progress, refuses to sell out to modern developers, and fastens huge numbers of balloons to float it away to where he & his late wife had always dreamed of going. Something about this house on Balmoral really touches me.