Last week, there were announcements about TWO Winnipeg landmarks possibly reopening. One was the Wagon Wheel Lunch and the other was The Cave nightclub.

The Cave was a chain of three nightclubs. The first was opened in Winnipeg at Ellice Avenue and Donald Street, likely where the Giant Tiger is now, by Gordon King in 1935. In 1937, a second was opened in Vancouver, then a final one in Edmonton.

It is Vancouver's The Cave that is expected to be revived. 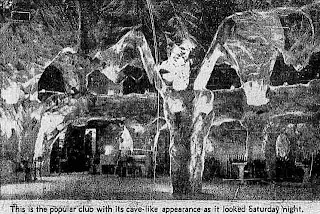 According to a recent the interview in the Vancouver Sun, the clubs went from being kitschy, decorated to look like caves complete with faux stalactites and featuring an odd mix of entertainment, to being a force on the Canadian entertainment scene:


A dig back through newspaper archives shows that Winnipeg's The Cave never got as far as that star-studded era. Line-ups often consisted of flamenco dancers, contortionists and magician acts, (see above and here and here).

Some notable names did come through the doors, though:

Hattie Noel, the larger than life singer, comedienne and the live action model for Disney's Hyacinth the Hippo, came through at least twice. (Read the Trib's review !).

The final show consisted of: singer and vaudevillian Thelma White, (mistakenly referred to in the Tribune as a Winnipeg girl - she was the one-time dance partner of Marjorie White who was from Winnipeg); a dance duo called the Todds; and Crawford Price, a "colored midget" trumpet player and singer.

In December 1944, while Max King, son of the founder, was manager, the club's jute and plaster interior caught fire and smoldered overnight causing extensive damage to the walls and ceiling. The club had to be extensively renovated before reopening. 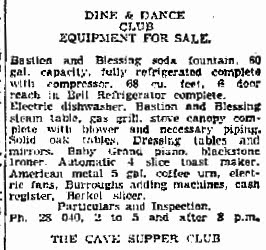 In spring 1947, manager Vic Hamilton announced that The Cave's lease was not being renewed and that the venue would close effective May 24, 1947. From the ad above, however, it appears that The Cave's run ended earlier than expected.

There have been a couple of establishments that have used that name since 1947 but I found nothing to indicate that they had an association with the original club, or the Vancouver version that carried on.

In the early 1960s, the Westwood Inn on Portage called their club The Cave Lounge and Dining Room.
At at the corner of Arlington Street and St. Matthews Avenue there was also a cave-like building called "The Cave". It appears to have morphed out of a circa 1969 grocery store called Trevi's foods, to become a store / restaurant, then a restaurant / lounge called Fountain of Trevi.

This The Cave had its contents auctioned off in 1995 and is now a residence.

Great Article it its really informative and innovative keep us posted with new updates. its was really valuable. thanks a lot.
φωταεριο αθηνα