162 Carlton and the end of downtown's residential neighbourhoods

I was helping someone research a home that used to be at 162 Carlton Street at York Avenue and thought I would share my notes. Click on the images for source information.

At the turn of the last century, Carlton Street between York and St. Mary Avenues in Winnipeg was part of a vibrant, residential neighbourhood.

The homes were not quite as stately as those found south of Broadway, but they were multi-storey middle class homes. The above is a photo of the block immediately south of 162 Carlton Street, between York and Broadway. A close-up shot of 176 Carlton can be seen here.


The large size of these houses made them perfect for taking in lodgers for extra income. Number 162 advertised 'rooms to rent' starting in 1901 right through to the end of its existence in 1969, with just a short break between 1913 and 1920.

From 1931 until the late 1950s, the home was owned by Elizabeth A. Hazelwood. She was the divorcée of Herbert and raising two small children. I could not find a great deal more about her except that in 1927 she was charged with 'possessing alcohol in a place other than a private dwelling'. The charges were dropped due to insufficient evidence.

A decade later she would be charged with 'possessing liquor not purchased from a government store', she was planning to appeal that and, again, the charges were dropped.

Hazelwood typically had a half-dozen lodgers living with her at any time. Many were labourers, clerks or drivers who worked in or around the downtown area. 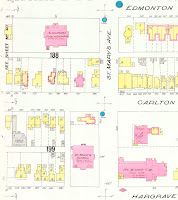 Above is a map of the neighbourhood circa 1906, 162 Carlton is actually three buildings to the left of where the map ends. 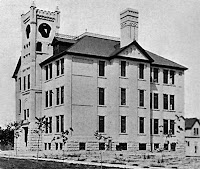 Another neighbourhood school was the Roman Catholic St. Mary's. It was located across from St. Mary's Cathedral, which still stands today. The school closed in 1968 and burned down the following year. The Delta Hotel now stands on that spot.

Across from 162 Carlton was a used car lot and garage. In 1943 the enterprise was known as Carlton Motors.

During World War II, Mrs. Hazelwood continued to rent rooms by the day or the week (1944), as can be seen above.


Perhaps the gentleman who placed this ad in December 1944 was a returning soldier looking to fit back into civilian life? Another returning solider, gunner W. Skoblack, listed 162 as his address upon his return to Winnipeg.

The house had a close call in September 1945 when a fire broke out in a closet. 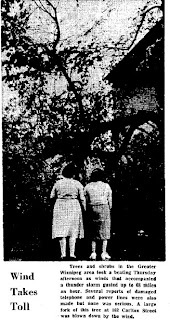 The 1950s was the beginning of the end for the downtown residential neighbourhood.

Young families were heading to the suburbs and the new neighbourhoods of tidy, post-war houses. The resulting drop in demand can be seen in the rental rates charged for rooms at 162 Carlton. Large rooms advertised at around $45 per month in the early 1950s were down to $35 by 1961.

This downward spiral could be seen in the tenants. After nearly 60 years of relative calm, a new wave of young tenants at 162 got into trouble. A teen girl went missing, another was fined for liquor infractions and a 21 year-old was jailed for attempted car theft.

By the late 1950s Mrs. Hazelwood concentrated on seniors as tenants. Ads often stated 'suitable for an old age pensioner.' The ages of those who died there over the next decade show this new focus: 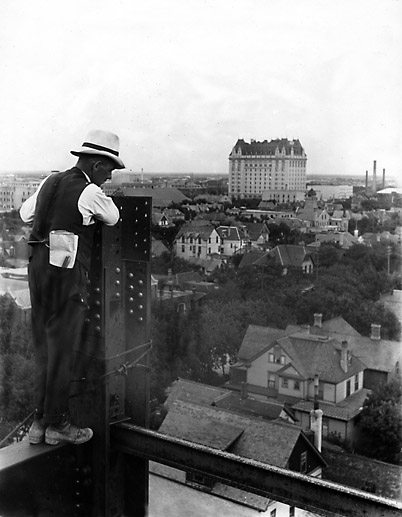 As the 1950s came to an end, commercial development began eating into downtown's housing stock. This can be seen in the above photos that look in opposite directions from the Hotel Fort Garry to Eaton's Warehouse in 1916 and 1959. The end of the line for this block of Carlton Street came a bit later than it did for others in the downtown.

To pave the way for construction of the Winnipeg Convention Centre, council passed a bylaw on September 10, 1970 authorizing the release of funds to expropriate the residential properties on the block.

The price paid for 162 Carlton was $100,000. Soon after, a deal was reached with the Winnipeg School Division for the expropriation and demolition of Alexandra school.

Before the Convention Centre opened in 1974, other land deals were signed that saw neighbouring blocks demolished to make way for Lakeview Square, Holiday Inn and Holiday Towers. From 1970 to 1974 a number of high rise housing developments and the parking lots needed to service them, also popped up.

It was a time of great growth for downtown Winnipeg and within a decade, all but a handful of lonely houses remained between Graham Avenue and Broadway.

Wow! The ability you have to research a particular address or neighborhood is very impressive, "Mr Christian". I think privacy concerns today mean that the anecdotes of charges, convictions, etc will no longer be identifiable with respect to particular residences for future archivists, but we are lucky that in previous times this was not a concern. After talking with you last week I can see how impressive your work is. Douglas

I'd imagine finding crimes in future will be easier as more court docs are available online. I can't find the link right now but Manitoba Justice has a searchable database - you can see what your friends and neighbours are / have been up to from the comfort of your home computer !

Researching crimes back then you really are at the mercy of the newspaper (assuming you don't want to visit a law library and dig for hours). For instance, I couldn't find how her supposed appeal went for the second possession charge.

Thank you for the information you have posted re: My Grandmother's rooming house. I can remember many a visit up the three flights of stairs to use the very old 'facilities'... the chain pulling from the water above my head scared me every time. I would be interested in sharing more stories with the person who started you on this quest. My daughter found your blog this morning as she has been doing some research.