A decades-old battle to save the Wolseley Elm came to an explosive end on October 31, 1958.

The tree was said to have been planted around 1860 by Mary Ann Good, the daughter of landowners along the Assiniboine River. As the city grew, the tree found itself in the middle of the intersection of Wolseley Avenue near Basswood Place.

The first official attempt by the city to remove the tree appears to have taken place in September 1936 when Alderman Blumberg brought forward a motion from the public improvements department to the floor of council to spend $70 to have it removed.

Blumberg initiated the department's investigation after driving down Wolseley one evening. Not expecting there to be a tree in the middle of the road, he almost ran into it. A colleague suggested that any driver surprised by such an obvious obstacle “...should be examined to see if he is fit to drive a car”.

In the end, the motion was voted down, though the department was instructed to see if some signage or reflective band could be put around it.

For some, the tree represented more than just urban greenery.

A Winnipeg Tribune story from 1942 said that to supporters it was a final, symbolic remnant of the open land that was once there while others took it a step further by claiming that it was emblematic of "man's victory over bureaucracy". A Free Press editorial on December 31, 1958 referred to it as "Winnipeg's famed symbol of non-conformity."

The tree did have its detractors. In a May 17, 1938 Free Press story it was referred to as "...the venerable old elm tree in the middle of the street which has provoked either furious indignation or appreciative delight from passing motorists."


There were other unsuccessful debates at city hall in the 1940s and 1950s to have the tree removed and there were even a number of attacks by vandals (also) who tried to do the job themselves.

The most famous showdown over the tree began on Tuesday, September 17, 1957.

In what a Free Press reporter described as a "...26 minute knock down, drag 'em out battle..." at a public works committee meeting that included booing and jeering from onlooking aldermen who came to watch, a motion to remove the tree was passed.

The reaction in the neighbourhood was angry and immediate. Are residents, many of the housewives, mobilized first thing Wednesday morning,and created a human barricade around the tree. Some even chained themselves to it. 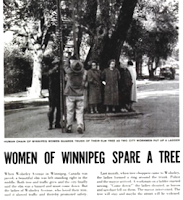 The plight of the women and their elm were making news across the country. LIFE magazine even dispatched a photographer and caught some great images for their October 7, 1957 edition.

On September 19th, the city decided to move in.

Initial attempts to cut top branches stopped when an unnamed grandmother of six threatened workers with an axe and police had to be called, (it may have been the same woman as seen above LIFE photo warning off a police officer with axe in hand.)

This challenge brought police, the fire department, reporters, and many other residents down to the site and soon it was swarming with people. Even mayor Stephen Juba came down from city hall to try to diffuse the situation.

After hearing from some residents, Juba ordered the city crews away. (It was pointed out later that under the city charter he could not give a direct order to city crews, to which he replied that if councillors voted to censure him he would resign.)

A truce of sorts was called in the end citing public safety concerns from a possible confrontation if work proceeded. The matter was put on hold and crews never returned. 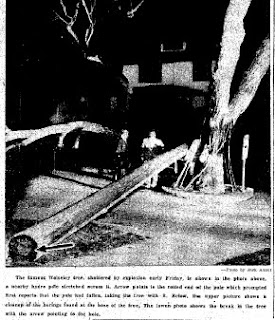 Some could not accept the fact that the tree was still standing.

A few days after the stalemate, vandals set it on fire. The remaining leaves on its lower branches were burned off, but it caused no serious damage. In the summer of 1958, it was doused in oil and set ablaze. Another attack saw it cut by a chainsaw.

At about 4 a.m. on October 31, 1958, residents for blocks around were awakened by the sound of an explosion.

Streetlights were blown out, a hydro pole lay on the pavement, and the Wolseley Elm was almost split in two. Bore holes in the base suggested that dynamite or similar type of explosive charge was used.

The section not felled by the explosion was the side already damaged in the chainsaw attack. The tree stood no chance of surviving and died a slow death over the next 18 months.

In June 1960, a tree scientist from the University of Manitoba declared the Wolseley Elm officially dead. The parks department made up a ceremonial death certificate and on July 18, 1960, city crews went in to remove its remains.

What became of the tree is unclear. Prior to its removal, Mrs. Borrowman, one of the protest leaders, wrote to an alderman requesting a piece of the tree so that it could be turned into a lamp. Alderman Slaw Rebchuck and mayor Steven Juba both suggested publicly that the wood should be taken, dried, then made into souvenirs.

I can find no further reference of souvenirs being made. Email ThisBlogThis!Share to TwitterShare to FacebookShare to Pinterest
Topic: Trees

This sounds like a great inspiration for some really committed (park)ing day activists, combined with guerrilla gardening.

Rather than just putting down some sod and creating a mini-park for an afternoon, in the dead of night, dig through some pavement and plant a tree.

There are plenty of over-wide residential roads where this could happen.

My Granny was in the picture defending the Elm.I remember it well. When the tree was finally removed I was there that day and I got a iece of the roots of the Elm cleaned it, sanded it and kept it for years. Not sure where it is now. BTW years after it was removed there was a car accident about 50 ft from where the tree had been. A drunk smashed into the rear of a parked car on north side of the street killing the passenger right in front of my Grannies house. Fat lot of good it did removing the tree.