Look who's been at the public teat - UPDATE

One hundred golden dumplings to Policy Frog for this lovely find. Tom Brodbeck begging cap in hand a number of times to city councillors for taxpayer money for socials, street parties and barbecues ?! Tsk, tsk 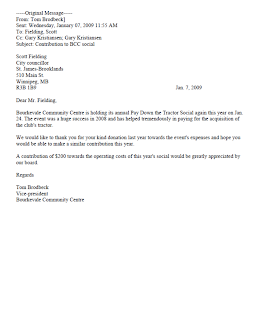 Source
For instance, here is one request letter from Brodbeck that I found asking for money for a social at Bourkevale Community Centre. This was the smallest amount requested.

Aside from being extremely hypocritical, could it be seen as a conflict of interest ? You report (critically) on these guys then personally send requests asking for ward allowance cash for a social or street party that you're having ?

Endless Spin is also up on this with some great quotes from Brodbecks' blog and a nice little ditty.

All of this "Brod-gate" stuff could pale in comparison very soon :

Interestingly, in today's Winnipeg Sun (a phrase I don't get to truck out that often) there is a CP story about the feds considering a bailout for Canadian Media:

"Canwest, CTVglobemedia and Quebecor, which owns the Ottawa Sun, have all been lobbying the Conservative government to come up with both short-term and long-term assistance. Harper has met with Canwest's CEO Leonard Asper and Quebecor's Pierre Karl Peladeau in the last few months."

Now THAT would be a hoot. Brodbeck working for a federal tax dollar bailed-out business ! It might drive him to have a couple of municipally-subsidized beers at Bourkevale's next social to forget about things for a while.

Don't forget that his kids went to provincial government employee daycare. Nothing like soaking up the perks !