UPDATE: My column in the Winnipeg Free Press about the history of Winnipeg's public washrooms, or comfort stations.

Last year the issue of public washrooms, especially in the Main / Higgins / Logan became fairly big news when the city poo-poo'd (pun intended) the use of port-a-potties along the strip. (see here and here).

The topic is in limbo as, in September 2008: The city's standing policy committee on downtown development unanimously passed a motion Monday morning that asks for a report on the matter. CBC 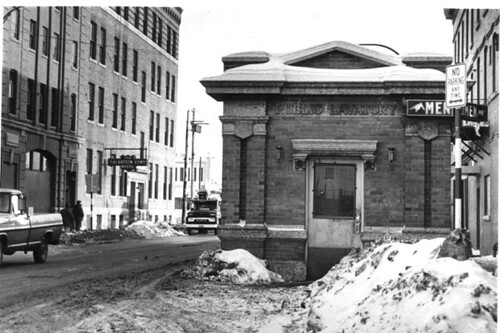 The exact same issue is up for discussion in an Edmonton inner-city neighbourhood. After a "No bodily functions allowed" sign campaign last summer by a pastor of an inner city church, the city conducted a study and agreed that there is, indeed, a problem with access to public washrooms in his inner city neighbourhood.

"Rev. James Holland said he often finds human excrement on and around the grounds of his Sacred Heart Church of First Peoples in the McCauley neighborhood. It's frustrating, but its hard to blame people, he said. The only public washroom in the area isn't open in the winter." CBC

The report, which can be found in pdf here and an accompanying spreadsheet of public washrooms available isn't exactly groundbreaking. A list of possible solutions mentioned by stakeholders that will be discussed by the city and with stakeholders again:

This week the issue goes back to the commitee for discussion at Edmonton City Hall. I hope our folks pay attention as the issue here will again hit the fan soon.