The Know Your Zone "conundrum"

After 6,697 tickets were issued during the recent residential snow clearing, some media outlets are spending a lot of effort commiserating with those who seem baffled by the "Know Your Zone" system. To me, it's not so much the zone system that is confusing, but the fact that so many people can't grasp it.

I am not claiming that the system is a perfect one, but after checking out a lot of alternatives suggested by its detractors on radio, TV and online sources, I don't see a much better alternative being offered. 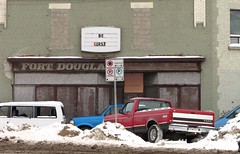 Some suggest tinkering with the current system by perhaps adding the zone letters to street signs. They claim that this would help not only residents, but those visiting other parts of town who have no idea what zone they are driving into.

The BIG assumption here, of course, is that if the letters were posted, people would dutifully check with 311 or the city website to see if it was one of the zones being cleared during the next 12 hours. This is exactly the service that 311 offers right now and that these people are not using. How would adding tens of thousands of letters to street signs improve that?

Others go so far as to say scrap "Know Your Zone" and go back to the old system where the city announced areas of the city that will be plowed over the course of the night. Those who lived under the old ban will remember its frustrations.

Since streets are done by priority, it meant that you sometimes had to find parking for two nights until an entire district was completed. That was an inconvenient and, if you lived in an apartment or near the core, possibly expensive undertaking.

To be as effective, the city would have to be as specific as possible. For instance, instead of "the West End", which would take days to clear completely, they would need to provide neighbourhood names such as Minto, St. Matthews etc., (there are 236 in total.) So, similar  to the current system, residents or those "visiting another parts of town" need to know the boundaries of different city neighbourhoods.

After working at a neighbourhood organization for the past couple of years, I can tell you that many residents have no idea what neighbourhood they live in. (Even the media often botches them, witness yesterday's print version of Metro which claims that an Inkster Boulevard murder happened in North Kildonan.)

The best solution I have heard so far came from a CJOB caller on Sunday night. He very seriously told the host that the city should hire kids, (because they're cheaper than them city workers, you know), to go door to door and knock and pamphlet the effected streets the evening before their street was to be plowed.

I would take it one step further and hire these kids to stand two-to-a-block on every street to give verbal reminders to people for the 72 hour duration of a snow clearing.

Sadly, even those options would still result in tickets being issued and excuses as to why people didn't know that their street was to be plowed.

There are numerous ways, using both 20th and 21st century technology, to find out your zone, when a residential snow clearing is taking place and what zones will be cleared. (There's even a video of cute, cartoon snow plows that will explain it to you.)

Ever since there has been a City of Winnipeg, it has cleared the snow from streets and it will continue to do so for the foreseeable future, or at least until climate change turns us into a Mediterranean-like oasis or a burnt-up desert waste land. Until then, best to figure it all out or just accept your tickets and move on.

So some people get tickets; why don't they have their own parking spaces? I have to say, I am completely unsympathetic having moved to Ontario where I've seen exorbitant prices and strangely timed parking rules in Toronto. Also, I heard multiple stories last year about Chicago where the city doesn't clear the parking lanes! And people "save" their spots with lawn chairs and get into fights. Umm, crazy! With all of the internet things these days, you should be able to get a text to let you know about the ban in your area after you sign up. Like you said, the city provides ways to figure out which zone you're in and if you can't be bothered to notice that it snowed and there might be a parking ban to look into, I really can't say I'm sympathetic. Although I did see a piece about a woman who got a ticket after her street was cleared and I'm not sure what's up with that (I guess the ban wasn't lifted?).

Get professional trading signals sent to your mobile phone daily.