On June 5, 1981 five men in Southern California died of a new form of pneumonia. The only thing they had in common, aside from gender, was that they were from the GBLT community. The investigation into their deaths discovered a new disease that became known as acquired immunodeficiency syndrome or AIDS. It has gone on to kill nearly 30 million people in just three decades.

The public perception of the disease (and the HIV virus that causes it) has gone through a number of phases in the past three decades. 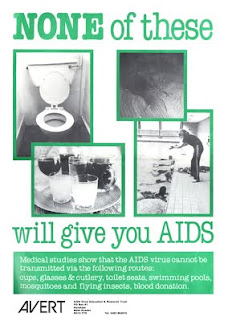 Initially thought of as a 'gay cancer' it led to the shunning and increased violence against a group that was at the time still near the fringe of society. As the disease moved into the heterosexual community fears mounted that it could be spread by casual contact leading to calls ban infected people from schools and other public places. As the epidemic ravaged Africa the perception shifted to it being a disease of poor, black people a world away from ours. It was out of sight out of mind for many. Some of those pioneer HIV / AIDS researchers are Manitoba born and educated (and still reside here !) Portage la Prairie's Dr. Allan Ronald, recently inducted into the Canadian Medical Hall of Fame, and Dr. Frank Plummer, who is now head of the National Microbiology Laboratory in Arlington Street. Manitoba continues to be at the forefront of HIV / AIDS research with the U of M's Stephen Moses, Keith Fowke and others. (For an interesting read about how the Manitoba - HIV / AIDS connection came about in the early 1980s see Partners in a Pandemic). 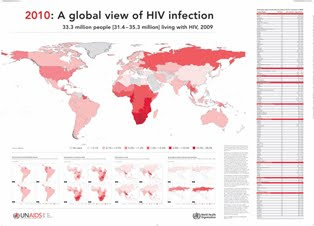 Through research and prevention programs there has been some good news on the HIV / AIDS front of late. The UN announced in 2009 that the number of new HIV infections plateaued and may even be in decline. The newest figures released just a couple of days ago confirmed that global decline to be around 25%.

While that statistic is encouraging it still means that there are over 33 million people living with HIV, nearly 10% of them children. In 2009 there were 2.6 million new HIV infections and nearly 2 million deaths from AIDS (source). Despite the drop in new infections there are still problem regions. Eastern Europe, especially the Russian Federation and Ukraine, now has the fastest growing HIV infection rate in the world with annual increases in the double digits. 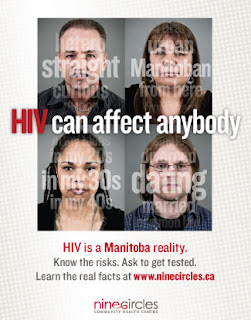 Here in Canada we may feel complacent as the number of AIDS diagnoses has steadily fallen in the past decade. During that same period, however, the number of new HIV infections has remained stubbornly constant (last year in Manitoba there were 100 new infections). As a result, the number of people living with HIV and AIDS in Canada has actually increased by 14% in the past 5 years. (For a breakdown by category and province).

A sign that HIV / AIDS will continue to maintain a foothold here is that about a quarter of HIV carriers in Canada don't know that they have it.

'City gays plan conference to formulate AIDS Strategy'
Winnipeg Free Press, July 4, 1983
There are two local events that will mark the 30th anniversary of HIV / AIDS. Tomorrow the 10th annual Run for Rights takes place in Kildonan Park and on Saturday, June 11 the Stride to Turn the Tide walk in support of grandmothers dealing with the affects of HIV/AIDS in sub-Saharan Africa takes place in Central Park. (Also see the Uptown article).

What is HIV and AIDS Nine Circles Health Centre

In the past week there have been four new international reports released on the global HIV / AIDS pandemic.

30 years after AIDS discovery, HIV rates up in Canada CTV.ca
Thirty years ago, AIDS was a source of public panic, a death sentence, a disease with no treatment and no hope. Today, that's no longer the case. And yet, many are worried that HIV rates on rising in Canada.

30 years on, millions of lives are being saved The Guardian
Figures from the WHO show a bigger increase in people from poor countries accessing drugs than ever before

The future of HIV diagnostics PlusNews
As the number of people receiving HIV treatment continues to rise it is important to ensure the technology to test and monitor patients on ARVs be made simpler, cheaper and more easily available to high prevalence, low-income countries, say experts.

The history of AIDS: Heroes and villains‎ The Economist
Anniversaries are times for reflection, and this one should be no exception, for the 30-year history of AIDS is a mirror in which humanity can examine itself.

On 30th anniversary of first AIDS case, why still no vaccine? Newsworks.org
Put aside for a moment debates about money, politics and sexual behavior that complicate the challenge to protect people from HIV. Instead consider the complexity of the virus itself.

30 Years In, We Are Still Learning From AIDS? New York Times
In the decades since the disease emerged, the fight against it has shaped research, medical treatment and the public sphere, and highlighted the challenges that remain.

A video retrospective on 30 years of HIV / AIDS

1983 CBC The Journal: AIDS and the Politics of Plague

ARV drugs do not cure people of the HIV virus or AIDS, they only make people sick. Most people do not realize that ARV drugs actually feed the HIV virus so that the virus doesn’t go into full blown AIDS and consume the entire body. Thus, ARV drugs keep one alive but at the expense of immense pain and suffering, feeding the virus their happiness and energy. Listen to the audios to see how Aids is being cured without drugs.
http://www.merkaba.org/audio/aids.html/

In May 2011, a study was published which indicates that ARVs can prevent the sexual transmission of HIV. It is true that ARVs do not cure a person of an HIV infection, but they certainly do not feed HIV. Rather, they interfere with the lifecycle of the virus, so more virus particles which could infect other cells are not made.
ARVs keep people well for longer, and reduce transmission of the virus. There have been huge advances in ARVs, eliminating many of the side effects of the drugs.

Yeah, nath. Don't forget there's the beetroot cure http://www.independent.co.uk/news/world/africa/death-of-doctor-who-advocated-beetroot-as-aids-remedy-1843092.html as well as the raping or drinking the blood of albinos http://health.yahoo.net/news/s/nm/us_tanzania_albinos_aids