This is part of my summer series of posts. Ones that I started but ran into difficulty filling in all of the blanks. If you can share any information, please do so ! If you've spent time in the Exchange in the past couple of years you may have seen this monument to Ed Letisnky. Who was this 'Architect of the People' ?

Age 10 with 'The Stargazer'

Edward C. Letinsky was born in 1940, grew up on Burrows Avenue and attended Aberdeen school.

The child showed a passion for art. The above photo appeared in the February 18, 1952 Winnipeg Free Press after the ten year old won a youth art competition that brought free art lessons for a year at the Art Gallery (then located in the Winnipeg Auditorium).

Clutching one of his creations, he told the Free Press that whatever he did in the future he hoped that it would involve sculpture and painting.

Fast forward to 1969 and Letinsky graduated from the U of M with a degree in architecture. Soon after he would begin working for the city planning department as an urban design co-ordinator.

Letinsky appears in the media from time to time associated with innovative inner city projects. 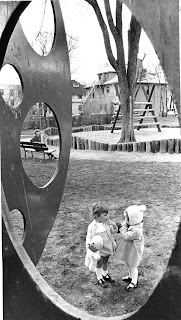 Edmonton and Assiniboine ca. 1973 (U of M, Trib Archives)

He was as part of the team that created the award-winning 'Port-a-Park' in 1972. Explaining that 'vacant lots are among the worst offenders in downgrading the image of a city' he touted the concept of a series of modular park items, from furniture to playground equipment, that could be set up quickly on a vacant lot. When the land gets developed again, the items could be brought to another location. The idea was to have a number of these temporary parks throughout the core area. Port-a-Park brought inquiries from Germany to Jamaica.

There were at least three Port-a-Parks set up. The first was in December 1971 at the south-west corner of Graham and Carlton. In the summer it was a sidewalk cafe / 'light refreshment park' and in the winter became a skating rink. In 1974 / 75 parks were set up at the SW corner of Garry and Ellice and on Donald near York. 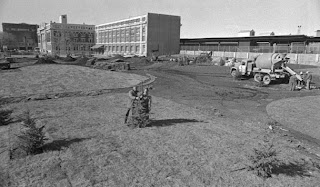 In 1973 Letinsky was spearheading the conversion of the former Royal Alex Hotel lot at Main and Higgins into a parkland showcasing Manitoba's natural land forms and flora. Forty indigenous trees, 1.5 acres of natural grassland and a 75 foot pond with water lilies and bulrushes were to have been part of it. The initial phase of the landscaping was done but, for reasons unknown, it was never completed.

Letinsky was co-author of the initial report suggesting that the 'Albert Street Area' of downtown be slowly converted into a trendy shopping and dining district similar to what most other cities, notably Montreal and Vancouver, had done. He was an active supporter of the plan and worked with business and building owners to start the conversion to what would soon be known as "Old Market Square", now The Exchange District.

Letinsky kept his interest in art. In 1980 he released a book Ed Letinsky's Sketch Book and had begun another one, on karate, when tragedy struck.

On October 13, 1980 Letinsky was killed in a farming accident on his property in Oakbank at the age of 40 leaving a wife and daughter. Val Werrier said of him:

"... he was a creative individual, he initiated the concept, and without direction from council co-authored the study with Gordon Courage, that eventually materialized
in the design of Old Market Square.... Once a rundown area with third rate hotels and lots of vacant space, Old Market Square today is a credit to the city". (WFP Oct 25, 1980)

After his death the Ed Letinsky Annual Sketch Prize was created for architecture students at the U of M.

In 1983 the cobble lane that ran from the northern tip of Albert Street into Market Square Park was named Letinsky Place, (in 2001 the lane was sold to the developer of the Ashdown building and the lane was absorbed into the parking area).

I could not find further information about the monument on Arthur Street. He realized his fondest dream was building a house with the labour of his own hands which he had designed with stones and rock. He designed and built a garden and greenhouse. Ed dreamt of an early retirement in which he would devote all his time to art.
Letinsky obituary, Oct. 1980, Winnipeg Free Press
Share