A century of flight in Western Canada 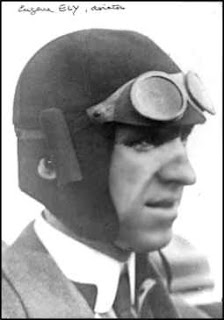 July 14, 1910 was supposed to be the day that the first airplane flight in Western Canada took place. The committee in charge of Winnipeg's Industrial Exhibition ('The Ex') hired American flyer Eugene Ely to come 'make flight' in his biplane in front of the crowds at the Ex grandstands. To add to the excitement, a group in Portage la Prairie offered a purse of $5,000 to have Ely fly from Winnipeg to Portage la Prairie and back.

The week did not go as planned. Due to strong winds, the Winnipeg to Portage flight was called off. Ely was driven to the field off of McPhillips Street to see if he could at least do a short flight to the old Ex grounds but:

The following evening, July 15, Ely returned to the field and this time was able to get off the ground for a short time but not across McPhillips to the Ex grounds. It was Western Canada's first flight, but few people there to see it. As described the next day in the Free Press:


lt bumped along over the ground on three small pneumatic tired wheels at as fast a rate as the average auto travels. In this manner the machine ran along over the uneven ground for almost a quarter of a mile. Then it ascended gracefully until it attained a height of about twenty feet traveling at that height for a hundred yards before gradually coming to the ground again.

A second flight had similar results but ended with the biplane bottoming out upon landing, breaking two of her 'ribs'. Ely tried a third flight which lasted longer but with an even rougher landing causing extensive damage to the plane.

Between the time it took to repair the plane and the unpredictable prairie winds, Ely stayed on the ground for the most part. The only exception appears to be a couple of 50 foot flights on July 17th that could be partially seen from the Ex grounds.

Exhibition officials were not impressed. They paid handsomely for the crowds to see a flight: $500 to bring the plane in and $200 a day for the pilot. On July 20th officials met with the pilot to give him an ultimatum: fly by the Ex grandstands or there would be no more payment.

Ely threatened to sue the Ex and some mused aloud as to whether Ely brought his "A" plane or a weaker version that could not make the same sort of flights he was known for in the U.S., including his world record breaking 4,300 foot ascent in Alabama.

There's no mention in later media of a lawsuit taking place or of Ely ever returning to Winnipeg.

Ely was dead in just over a year so a return or lawsuit was not likely to happen.

Few of those early flyers lived to old age.