On the front lines of H1N1 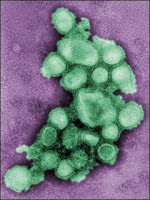 It has been a few months since we were at the height of concern about H1N1. In the past couple of weeks three reports were released that take a look at how well Canada dealt with the pandemic at the front-line level and make suggestions on improving that response for future public health emergencies. 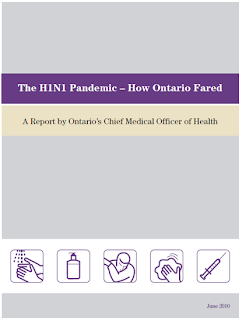 The H1N1 Pandemic – How Ontario Fared: A Report by Ontario’s Chief Medical Officer of Health News Release - Report
Last week, Ontario's Chief Medical Officer of Health released her report giving Ontario a 'good' grade for dealing with the pandemic but noted deficiencies in their ability to roll out a street-level mass immunization campaign and a lack of co-ordination and consistency of services from one health authority to the next. The outbreak was mild enough, however, that the public health system was able to cope. 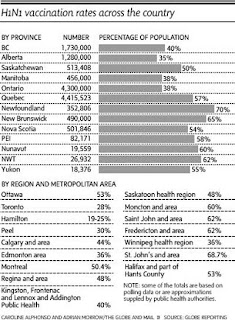 To illustrate the disparities between different Ontario health authorities, Ottawa had a 53% vaccination rate while Kingston had 40% and Toronto just 28%. It's likely that many of Ontario's conclusions will be echoed by other provinces as similar disparities can be seen in Alberta: Edmonton 36% versus Calgary 44% and with Moncton NB 60% versus Halifax NS at 53%.

Winnipeg, by the way, had a 36% vaccination rate which is just over half of what Calgary, Saskatoon and Regina were able to achieve. 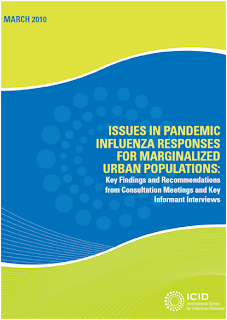 Issues in Pandemic Influenza Responses for Marginalized Urban Populations
English - French
Last week, Winnipeg was host to one of a series of national meetings taking a look at the experiences of those who dealt with the most vulnerable in society during the pandemic. 'Most vulnerable' include the homeless, shut-ins, sex workers, those living in shelters or half-way houses and others who fall through the health care cracks due to lack of insurance or documentation.

The report is still in draft form but participants so far have expressed concerns about vaccination clinics not being set up where these populations actually are. Also, as many of these agencies run on shoestring budgets with few full time staff, they had difficulty accessing and purchasing the resources and supplies that front line workers in other facilities were told they needed: gloves, masks, sanitizer, dispensers etc. 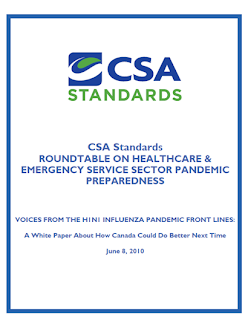 Despite having national and provincial plans in place some jurisdictions didn't have enough supplies like gloves and masks stockpiled. Many also felt that word didn't get out quickly or clearly enough as to who the highest risk groups were and who needed to be vaccinated first.

They also brought up the need for 'scalability' within the pandemic levels set by national and provincial bodies. Different parts of the country had very different experiences with the number and severity of cases, yet blanket levels were used to lump them all together.