Bits and bobs from the UK election (the night of) 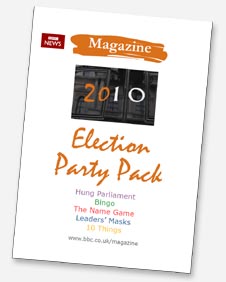 - I chickened out of taking Curtis up on his 'guess the numbers' challenge. I opt instead to print out the BBC's Election Party Pack, complete with games, puzzles and leader masks, and let the swingometer show me what's happening.

- I've always been impressed with British election graphics. There's the swingometer introduced in 1965 and, despite being a not so effective tool in a three way race, was still turned out. There is also the flash election seat calculator. I can't wait to watch U.K. election coverage once 3D TV is the norm !

- With many predicting this election to be the closest in more than a half century you could safely assume the following:

1. voter turnout would be high;

2. anything that keeps people from voting would be a big deal.

Well, voter turnout is still being calculated but the Scottish Herald reports that the increase in voter turnout there ranged from five to sixteen per-cent.

Some polling stations were overwhelmed leaving hundreds of voters unable to cast a ballot. At Hackney, the Irish Times reports, there were at least 140 people still in line at 10 pm when the polls closed prompting an angry sit-in. Similar problems are reported in Manchester and Wales. (Click image above for the chaos at St. Johns).

Well, the Conservatives are starting to pull ahead...back to the TV !

That has to go to Cameron's riding of Witney with Alan Hope of the Monster Raving Loony William Hill Party (above) looking, a lot like Nick Hill. There was also a guy (presumably just dressed up as) Jesus Christ, complete with crown of thorns ! 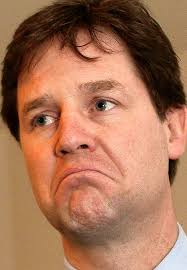 - Cleggmania has been put to rest. Right now the LibDems are actually down a seat from 2005. As our third party has seen time after time: no matter how attractive the leader, no matter how high the polls, when people walk into the polling booth they usually choose between the two giants.

- It was thought that the 'big two' parties would be punished after the ghastly MP expense scandals. They weren't. If all the pols piss off all the voters equally it's like hitting a reset button. This is an election where pretty much everyone came out a loser, except the small victory the Greens can claim by winning their first-ever seat. Gordon Brown whose political career has closely paralleled that of Paul Martin appears set to carbon-copy the final chapter. Cameron, once twenty-plus points ahead of Labour in the polls, could still find his party shut out of even being part of a coalition government. The LibDems, like the media, got too wrapped up in Cleggmania which was a mirage.

- It's been a long night .... It will be interesting to see what the morning brings !