It's something I think about fairly often and especially so in the last couple of days.

Over the weekend TCM had it's first classic movie festival in Hollywood airing films from many genre and eras.

Also, while loading up my 'This Day in History' posts for the coming week I see that Saturday, May 1st will mark the 35th anniversary of the final screening of the Phantom of the Paradise in Winnipeg after a 17 month run at the Garrick ! (For more on Winnipeg and the Phantom).

I also recall when the Ellice Café and Theatre first opened they showed classic films on Tuesdays, (actually DVDs projected on the big screen). Admission was free, though donations were accepted. A lack of marketing kept audiences pretty small. I remember, though, one night they showed Singin' in the Rain. A few seniors had come down to watch and it was great to hear them swoon when Gene Kelly would appear on screen ! 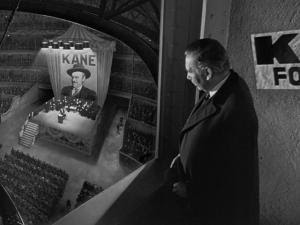 I'm not hooked into the entertainment biz in the city so I could be out to lunch on what sort of draw or expenses would be involved. I also realize that Citizen Kane or Singin' in the Rain on the big screen won't lure masses of people from Date Night and such but, still, a classic film fest or regular classic film night, in my opinion, would be a neat thing.

If I'm missing any classic movie venues or events drop me a line in the comments section !

As Robert Osborne, one of TCM's hosts, says: There's no such thing as an old movie ... just a movie you haven't seen yet.

I used to take in Midnight shows all the time at Convention Centre, Cinemateque, and the Imax. Caught a few at Cinema 3 as well. I remember there were often pretty good crowds, and it's amazing to me that retro cinema is virtually non-existent here these days.

The North gate in the basement of the Raddison would be ideal. It's a single screen, and is just sitting there empty as far as I know.

I think Canad-Inns bought that hotel, it would interesting to see what they could do with that.

Oh, man, the Convention Centre Cinema - ha !. I saw a few films there back in the day !

That's right, they never did anything with the North...star, I think they were called, cinema. Was that one or two screens ?