I enjoy watching old movies, especially on commercial-free TCM. One genre I don't watch a great deal of, other than the odd clip here and there, are silent films but I caught a great one last month. 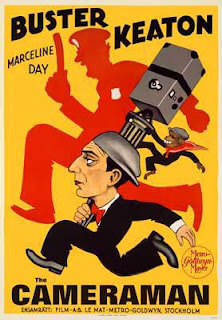 It's MGM's The Cameraman (1928, silent - musical accompaniment) starring Buster Keaton and directed by Edward Sedgwick. It is said that MGM considered it for decades to be the 'perfect comedy' and was required watching for MGM creative staff and executives. 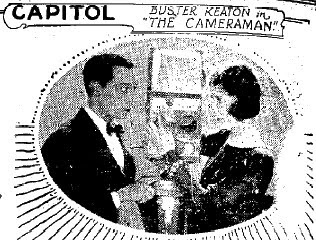 It opened at Winnipeg's Capitol Theatre in October 1928. A Free Press write up said:


...the comedy which Buster Keaton, of frozen face fame, presents in the picture 'The Cameraman' gives Capitol theatre patrons this week a full view of some highly hazardous tasks; with a with a decidedly comic angle to them all...
Wpg Free Press Oct 29, 1928 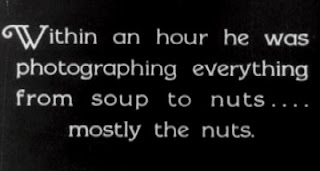 Buster Keaton plays a hapless tintype hawker who decides he wants to join the new and exciting world of TV news-reel filming. The fact that the girl he is secretly falling in love with happens to work at the news-reel office plays a big part of his decision !

Following his antics as he tries too hard to please is a joy to watch ! It's a 'smart' slapstick comedy; think more Mr. Bean than Gerry Lewis.

This swimming pool changing room scene (starts at 1m 17s) is like watching a ballet ! (If you watch to the end you can see where Atkinson got the inspiration for one of his funniest Mr. Bean skits). Similarly, the staircase scene in the apartment is physical comedy genius ! Here's Keaton getting his chance to film the The Tong War; an incredible few minutes of cinema !

The Cameraman has a quick pace and some of the great circa1930's urban action scenes would rival what can be seen in film today (minus any green-screen digital effects). If you like film of any era you'll like The Cameraman.

A tip: the youtube clip and a full version on VEOH are grainy but the version I saw on TCM, where the Tong War clip is from, was very clear. I believe it was restored around 1995 / 96 so if you rent or download it, get a version released after those years.
Related:
The Int'l Buster Keaton Society (The Damfinos)
American Masters: Buster Keaton - PBS.org
The Buster Keaton Collection : A Review - chud.com

Jan 7: Update: Thanks to Anon for this:

"The Cameraman" and a lot of other public domain films can be seen on the Internet Archive. The film is here.

"The Cameraman" and a lot of other public domain films can be seen on the Internet Archive. The film is here.

Thanks ! I Googled and Googled looking for a version of it, I assumed it was somewhere out there. ! I will add the info !