Toronto M.P. Carolyn Bennett wants to penetrate deeper into the issue of toxins in sex toys. Reading some of the post and comments over at at Fat Arse's blog I thought I would dive in on the issue. 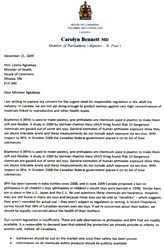 Here is a copy her letter written to Minister Aglukkaq on the issue after the matter was brought to her attention by a sex shop owner in her constituency. The Globe story explains how that all came about. The fact that sex toys are pretty much unregulated and that there may be safety issues with their ingredients is not new. Here's an article from 2005 regarding these concerns. In 2006 Greenpeace Netherlands released a report showing that some substances banned in EU children's toys due to health concerns were found in high levels in EU adult toys. 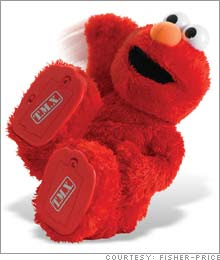 In recent years what goes into some of our everyday products has become a top-of-mind issue.
What likely kicked it off were massive recalls of lead-contaminated toys that Fisher Price, Mattel and other firms were putting on the market, an issue that the large toy marketers seemingly haven't learned a lesson from.

Also, there is the increasing suspicion that bishphenol A (BPA) may be an endocrine disrupter, causing health agencies to priorize further BPA research and to consider outright bans for some uses. Canada's research into BPA has been looking at it's use in food packaging, children's 'mouth toys', drinking bottles, medical devices. Pretty much everything that enters the body ... well, except for adult toys.

Perhaps it could have been packaged a bit better from a public relations point of view but I guess when you're a doctor talking about sex toys in the open, and pointing out what even Health Canada may consider to be an oversight, isn't that big a deal. 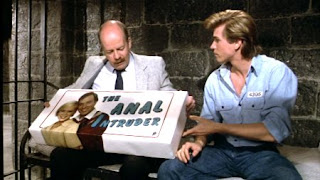 This being a post about sex toys and me being a guy, well, I couldn't let this go without a bit of a titter. When the initial headlines about 'sex toy safety regulation' hit the 'net today I recalled a scene from 1984's Top Secret ! when Nick Rivers is informed by a Nazi agent that his manager was found dead...


"Evidently, your friend did not realise that here in East Germany we use 220 volt current. He was found in his hotel room impaled on a large electrical device. Our surgeons did what they could but it took them two hours just to get the smile off his face".

Related:
- ‘Urgent need’ to regulate sex toys: MP Globe and Mail
- In 2010 Canada will be hosting a WHO international Experts Meeting on BPA

I like your work.Thanks for sharing.you mention some food packaging so get some more packaging ideas Contact us.I am sharing my experiences with them.

Great Post! If you now about the most reasonable course of action will be to contact and hire an MSP (Managed Service Provider). iVersion Managed Hosting providers are your all-in-one packages to get started on the Internet.